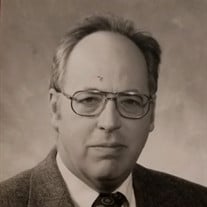 Kewanee - Alan Randolph "Randy" Comba, 79, passed away on Friday, October 8, 2021 at Genesis Clarissa C. Cook Hospice House in Bettendorf, IA, surrounded by his loving daughters. Randy was born on April 10, 1942 in Pittsburg, PA to the late Louis and Edna (Dye) Comba. In 1946 his family moved to Princeton, IL when Randy was a small child and he fell in love with the area. He was a graduate of Princeton High School, Class of 1960. Randy received his law degree in 1967 from the University of Iowa (Go Hawks) and remained a true-blue Hawkeye fan for life. He married the late Barbara Enberg in Tiskilwa, IL at St. Jude's Episcopal Church on May 27, 1972. He and Barbara resided in Princeton and raised their three daughters, Christina, Cara and Catrina. As a teenager, Randy worked at Nelson's Grocery Store. Once he finished law school, he worked as the Illinois States Attorney for Bureau County from 1968 to 1976. Upon completion as States Attorney, he opened his own practice in Princeton, A. Randolph Comba Attorney at Law. Randy retired in 2017 and moved from Princeton to Courtyard Village in Kewanee, IL. Randy was a member of the Princeton Rotary Club and also a member of the Starved Rock Runners Club. He loved Bureau County History and History in general. He enjoyed reading about history and talking to people about history. He was a very intelligent man and enjoyed sharing his vast knowledge of American History with others. He loved to reminisce about the fun times with friends from childhood. Randy would spend time during the summers as a child with his cousins in Picher, OK where his family was originally from. Creating fond memories of climbing up on the chat piles as a child with his cousins. He became interested in the towns mining history that included his grandparents, aunts and uncles. Randy was passionate about running, you could always see him in the early morning running on Main Street alongside his companion of many years, his golden retriever, Annie. He loved going to Hawkeye games and reliving memories of his college years with his law school gang. He loved listening to music, especially the oldies like Buddy Holly and Frank Sinatra. He had quite the sweet tooth and loved to try any kind of chocolate dessert. He had a love of funny movies and some of his favorites were Animal House, Blazing Saddles and Caddy Shack. He grew up reading Mad Magazine, one of his very favorite things as a child. He loved collecting beautiful historical pictures and hung them in his home and office so he could see and enjoy them all the time. He also loved trains and you could find him taking the train to travel into Chicago or just for a ride and then back to Princeton. He adored his daughters and was so grateful for their love and care over the past few years. Randy is survived by his three daughters; Christina (Tony) Isabella of Woodburry, MN, Cara Comba of Davenport, IA and Catrina Comba of Davenport, IA. Preceding him in death, his parents, Louis and Edna Comba, his wife of forty-five years, Barbara (Enberg) Comba (05.07.2017), and one sister Phyllis Comba. In lieu of flowers, memorials may be directed to the Starved Rock Runners Club or the Bureau County Historical Society. A Memorial Service will be held on Saturday, October 23, 2021 from 10:00 a.m. to 12:00 p.m. at Norberg Memorial Home, Inc. & Monuments. Graveside Services to follow at Oakland Cemetery in Princeton, IL, on Saturday, October 23, 2021. Cremation rites accorded. Online memorials and condolences may be directed to www.norbergfh.com Arrangements by Norberg Memorial Home, Inc. & Monuments

The family of Alan Randolph Comba created this Life Tributes page to make it easy to share your memories.

Send flowers to the Comba family.