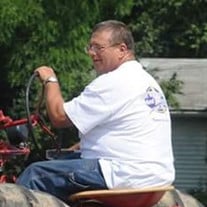 Princeton – Albert Harold Haun, Sr., 62 of Princeton, IL passed away on Saturday, February 6, 2021 at Perry Memorial Hospital surrounded by his loved ones. Albert was born on March 17, 1958 in Spring Valley, IL to Harry and Shirley (Hubbard) Haun, Jr.  He was a graduate of Princeton High School, Class of 1976.  He married Lisa Barringer at the Christian Church of Princeton on June 9, 1990.  They celebrated their 30 year wedding anniversary last year.  He was the owner operator of Haun Trucking.  A job he did whole heartedly and loved.  He was a member of the Indian Valley Antique Club and the Tiskilwa Community Association.  Albert enjoyed hunting and fishing, a hobby he undertook and taught to his children and grandchildren.  He was an avid gun collector and loved restoring old tractors.  His greatest memories and best times were always spent with family, anytime, anywhere.   He converted his basement into the “Karaoke Dungeon” where all were welcome, complete with lights, disco ball and karaoke system.  On any given night you could find a crowd wanting to hang out, sing songs and tell a story or two.  He loved his family, they were everything to him.  He didn’t like to take the stage in the Karaoke Dungeon much, he didn’t feel like he was much of a singer, but he loved watching his children and grandchildren sing and have fun.  He will be greatly missed by his family, friends and fellow Dungeon Members.  Albert is survived by his loving wife of over 30 years, Lisa (Barringer) Haun; his mother, Shirley Haun; five children, Cynthia “Cindy” Haun, Debra (Haun) Jaggers, April (Barringer) Melton, Robert “Bob” Haun and Albert Haun, Jr.; two adopted children, Craig Celus and Jessica “Jess” Mendlovitz; nineteen grandchildren; as well as numerous nieces, nephews and cousins.  He is preceded in death by his father, Harry Haun Jr, one sister, Sandra Haun and two brothers, Terry Haun and Kenneth Haun, and his four legged companion Baby, who passed away too soon and Alberts heart was too broken to ever get another dog again. In lieu of flowers, memorials may be directed to Shriners Childrens Hospital in Chicago, IL.  A memorial service will be held at a later date and time.  Cremation rites accorded.  Online condolences and memorials may be directed to www.norbergfh.com Arrangements by Norberg Memorial Home, Inc. & Monuments.

Princeton &#8211; Albert Harold Haun, Sr., 62 of Princeton, IL passed away on Saturday, February 6, 2021 at Perry Memorial Hospital surrounded by his loved ones. Albert was born on March 17, 1958 in Spring Valley, IL to Harry and Shirley... View Obituary & Service Information

The family of Albert H Haun created this Life Tributes page to make it easy to share your memories.

Send flowers to the Haun family.