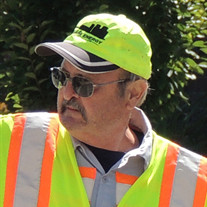 Andrew ‘Andy’ Anderson PRINCETON — Andrew J. “Andy” Anderson, 65, of Princeton passed away Friday, April 21, 2017, at Colonial HealthCare and Rehabilitation Centre in Princeton. Andy was born June 24, 1951, in Princeton to LaVerne and Maxine (Carroll) Anderson. He graduated from Princeton High School in 1969 and took business management classes at Illinois Valley Community College. In 1978, Andy owned and operated A.J.’s Amoco on North Main and Elm Place. Over the years he worked for Dean’s Transfer, Princeton Landfill, and retired from LCN door closures. Most recently he was a crossing guard at Main and Peru streets and rang the bell for the Salvation Army at Walmart. He also volunteered as a Gold Coat at Perry Memorial Hospital in Princeton. Andy’s passion was stock car racing. In the early 80’s he owned a stock car, No. 41, and his driver was longtime friend Glen Neff. They raced the stock car at the Bureau County Speedway and area tracks. He loved watching races on a big screen TV. He is survived by one sister, Linda (Jerry) Harris; three brothers, Wayne (Connie) Anderson, Terry (Maria) Anderson and Bob Anderson; and many nieces and nephews. He was preceded in death by his parents. Per his wishes, there will be no services. Cremation rites have been accorded. Memorials may be directed to the Diabetes Association or Cops for Cancer. The Norberg Memorial Home in Princeton is in charge of arrangements.

The family of Andrew Anderson created this Life Tributes page to make it easy to share your memories.