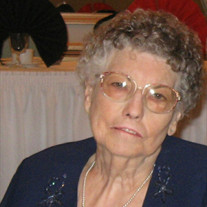 Zearing, IL – Arlene A. Richards, 90, of Zearing, Il passed away on April 16, 2018. Arlene A. Richards was born on December 18, 1927 in Hall Township, IL to Otto E. and Lillian L. (Weissenburger) Koerner. She married the late Roger L. Richards (Feb 21, 2006) on July 3, 1946 at the St. Johns Lutheran Church on the Hill, in Princeton, IL. She was a graduate of Malden High School class of 1944. Working at General Telephone Company as a local operator and Westllox in Peru until she started her family. She was a member of St. Matthews Lutheran Church in Princeton, IL and enjoyed playing cards and spending time with family and friends. Arlene is survived by two sons; Don (Karen Metternich) Richards, Brian Richards both of Princeton, IL, one daughter Sharon (Fred) Bills of Granville, IL. three grandchildren; Michele (Chris) Tackett of Stanford, IL, Scott (Ashley) Bills of Sandwich, IL and Kristy (Mike) Holeman 0f Bettendorf, IA, one great grandchild; Hallie Tackett of Stanford, IL and several nieces, nephews and cousins. Preceded in death by her parents, her husband, one infant son (Gerald), four brothers; Arthur, Lester, Marvin and Wayne and two sisters; Ethel and Hazel. Services for Arlene will be held at Norberg Memorial Home, Inc. on Saturday, April 28, 2018 at 11:00 am, officiated by Reverend Scott Schmidt followed by a graveside service at Elm Lawn Cemetery in Princeton, IL. Visitation will be from 10:00 am to 11:00 am Saturday, April 28, 2018 at Norberg Memorial Home, Inc. in Princeton, IL In lieu of flowers memorials may be directed to the family or the Alzheimer’s Association. Online condolences may be left at www.norbergfh.com

The family of Arlene A. Richards created this Life Tributes page to make it easy to share your memories.

Send flowers to the Richards family.