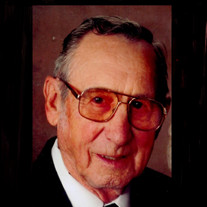 Princeton - Arno Helmut Streit, 94, passed away at his home on Thursday, April 1, 2021 surrounded by his loved ones. He passed away from a non covid related illness. Arno was born in East Prussia, Germany to the late Arthur and Minna (Parakenings) Streit on March 30, 1927. He attended and graduated from high school in Germany. He was a German Paratrooper in World War II. He worked as a farmer in Germany, where he met the love of his life while working the fields. Irmgard "Irma" Pick was walking by and saw Arno holding a kitten and they began their courtship, a courtship that handholding was a must for Arno. They married on December 12, 1953 in Lelm, Germany. He responded to an ad for a job in the United States. The ad was placed by a local Princeton farmer, Paul Miller, who had run the ad in the German News Paper because he needed a farmhand that spoke German. Arno filled out his application, with the assistance of the church, Paul Miller sponsored Arno and brought him to Princeton, IL. May of 1952 via Ship. Arno and Irma corresponded while he worked the fields. He returned to Germany to marry her in 1953. Paul Miller also sponsored Irma, she arrived at Midway Airport in August of 1954. Reunited with his love, soon after, Irma gave birth to the first of their three children. He continued being a farmer after Pauls passing as he was given an opportunity to purchase some farmland next to Pauls farm. He also worked at LTV Steel Mill in Hennepin, IL. He was a crane operator, never calling in sick and worked 72 hours one week. He retired after 24 years of service. Arno loved vacationing and cruising with his family. He especially loved being outdoors, he would sit outside and watch the animals or read the paper. He could sit for hours and read. He loved to dance with his bride every chance he got. He also liked slow rides around the country side, he wanted to see the fields. He was a participant in the World War II Reenactment held annually in Rockford, IL for many years. People would look for him year after year to either say hello and catch up or get a picture with a real German Paratrooper. He was very supportive of his family and their hobbies, to include raising Alpacas, as well as winding yarn from the Alpaca fleece. He loved all animals and was kind to one and all. He was a gentle, caring man who left an impression on everyone he met. Surviving Arno is his bride of 67 years, Irma of Princeton, IL; three children Doris Streit of Princeton, IL, Ingrid Streit of Bettendorf, IA and Harold (Brenda) Streit of Princeton, IL; one brother, Werner (Erne) Streit of Schweskaw, Germany; one sister Marianne (Gert) Hartmann of Witten, Germany. Preceded by his parents, Arthur and Minna Streit and two brothers, Gunter Streit and Erwin Streit. In lieu of flowers memorials may be directed to the family for charitable distribution. A visitation will be held on Thursday, April 8, 2021 at Norberg Memorial Home, Inc. & Monuments, In Princeton, IL. from 5:00 p.m. to 7:00 p.m. Services for Arno will be on Friday, April 9, 2021 at St. Matthews Lutheran Church in Princeton, IL. at 10:00 a.m. officiated by Pastor Scott Schmidt. Followed by graveside services at the Mason Cemetery in Princeton, IL. Online memorials and condolences may be left at www.norbergfh.com Arrangements by Norberg Memorial Home, Inc. & Monuments.

Princeton - Arno Helmut Streit, 94, passed away at his home on Thursday, April 1, 2021 surrounded by his loved ones. He passed away from a non covid related illness. Arno was born in East Prussia, Germany to the late Arthur and Minna (Parakenings)... View Obituary & Service Information

The family of Arno H Streit created this Life Tributes page to make it easy to share your memories.

Princeton - Arno Helmut Streit, 94, passed away at his home on...

Send flowers to the Streit family.