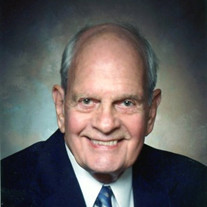 Princeton - Arthur W. Seeds, passed away on Tuesday Morning, December 1, 2020 at the age of 94 concluding a long life well spent in the service of his family, friends, community and country. He grew up on a farm near Neponset Illinois with his parents, Hattie (House) Seeds and Arthur E. Seeds and sister Beverly Little. The farm life of rural Illinois built the strong body and good character that Arthur brought to his adult life. After graduating from Neponset High School, Arthur, known as Wilbur by his childhood friends, enlisted in the U.S. Army and served as a military policeman in the 524 MP Battalion Company C stationed in Linz Austria during the post WWII occupation. Upon his return from military service he earned a degree in Agriculture from the University of Illinois and was a member of Alpha Gamma Rho. While a college student, he met and fell in love with his wife of 62 years, Janice A. Milburn of Kewanee. Two children were born to their union, Scott of Downers Grove, IL and Karen (John) Marshall of Naperville IL. His career began at the Lee County Farm Bureau and progressed to the Illinois Farm Bureau and then the American Farm Bureau in Chicago. Following his interest in association management he moved to the American Medical Association, and eventually organized an association management company serving the Barbeque Industry Association and other trade associations. His interest in association management kept him busy in many societies including the United Stated Chamber of Commerce Committee of 100 in Washington D.C. In his retired years there was no resting and folding of the hands. He served at the Bureau County Farm Bureau, the Princeton Chamber of Commerce, Flags of Freedom, and the America Legion Post 875 all while managing his family farm. Arthur was also the most exceptional do-it-yourselfer one would ever meet achieving proficiency in too many crafts and trades to list here. He was a dedicated patriot and lifelong advocate of the greatness of the United States and the freedoms he was fortunate to enjoy during his lifetime. He will be remembered by his family as a gentle, caring, and generous father and grandfather who loved to find all that was praiseworthy in those he met. Survived by; two children, Scott Seeds of Downers Grove, IL and Karen (John) Marshall of Naperville, IL; Three granddaughters, Heather (Daniel) Gray, Natalie (Paul) Bellmore, Hillary (Greg) Leeper; seven great grandchildren, Madisen, Cameron, Isaac, Aubrey, Jadyn, Evangeline, Jacob; one sister Beverly Little. Preceded in death by his parents, Arthur E. and Hattie (House) Seeds, and his wife Janice Seeds. In lieu of flowers, the family would greatly appreciate cards and memories of Art send to Norberg Memorial Home, Inc. & Monuments at 701 E. Thompson St. Princeton, IL 61356 as a substitute for funeral attendance which is not possible at this time due to the Covid-19 Pandemic. Donations in Arts memory should go to; Hillsdale College, 33 E College St., Hillsdale, MI 49242 or your local Salvation Army. A private family visitation and services will be held on Saturday, December 5, 2020 at Norberg Memorial Home, Inc. & Monuments, officiated by Pastor Laura Root-Tanner. Graveside Services, open to the public. Military Rites Accorded by the Neponset American Legion at 2:00 p.m. on Saturday, December 5, 2020 at the Floral Hill Cemetery in Neponset, IL. Online memorials and condolences may be left at www.norbergfh.com Arrangements by Norberg Memorial Home, Inc. & Monuments.

Princeton - Arthur W. Seeds, passed away on Tuesday Morning, December 1, 2020 at the age of 94 concluding a long life well spent in the service of his family, friends, community and country. He grew up on a farm near Neponset Illinois with... View Obituary & Service Information

The family of Arthur W Seeds created this Life Tributes page to make it easy to share your memories.

Send flowers to the Seeds family.