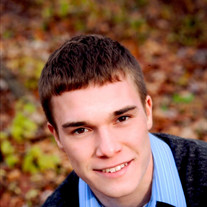 Tiskilwa - Austin H. Hellman, 24, of Tiskilwa, IL, passed away on Sunday, December 22, 2019 from injuries sustained in an auto accident. He was born on February 26, 1995 in Corning, NY, to Linn and Lorita (Shirley) Hellman. Austin attended Princeton schools and graduated from Princeton High School in 2013. He then moved on to Lincoln College, where he was a member of the golf team, graduating in 2015. Austin was a bright light to those his life touched, with a giving and humble heart, infectious smile, and generosity of spirit that set him apart in our world. That light grew even brighter from the day he met the love of his life, Libbie Wamhoff. Together, they built a home and life that radiated his best qualities. He had a passion for the outdoors, with time spent on the water, in the woods, and in the duck blind serving as the backdrop for many favorite memories with his family and best friends. His commitment to a job well done was on display in any task he undertook, whether for a friend, his family, on the job at C&C Electric, or for himself (if he managed to get to those…everyone else usually came first). He was everything you could want in a son, brother, partner, and friend. He is survived by his parents, Linn and Lorita Hellman, of Princeton, IL; his brother, Adam Hellman, of Cape Girardeau, MO; and his girlfriend and partner in life, Libbie Wamhoff, of Tiskilwa, IL; He also leaves his maternal grandparents, James and Joyce Shirley, of Emden, IL; paternal grandmother, Loretta Hellman, of Emden, IL; many loving aunts, uncles, and cousins, several dear friends, and his most loyal and inexhaustible companion, his red heeler, Maggie. Austin is preceded in death by his paternal grandfather, Norman Hellman, and uncle and aunt, Gary and Marla Shirley. Memorials may be directed to the Princeton Park District or the Evangelical Covenant Church in Princeton, IL., in Austins honor. A visitation will be held Friday, January 3, 2019 from 4:00 p.m. to 7:00 p.m. at the Evangelical Covenant Church in Princeton, IL. Services for Austin will be held on Saturday, January 4, 2019 at 10:30 a.m. at the Evangelical Covenant Church in Princeton, IL, officiated by Pastor Derek Boggs. There will be an additional hour of visitation preceding the service, beginning at 9:30 a.m. at the church the day of Austin services. Arrangement by Norberg Memorial Home, Inc. & Monuments. Online condolences may be left at www.norbergfh.com

Tiskilwa - Austin H. Hellman, 24, of Tiskilwa, IL, passed away on Sunday, December 22, 2019 from injuries sustained in an auto accident. He was born on February 26, 1995 in Corning, NY, to Linn and Lorita (Shirley) Hellman. Austin attended... View Obituary & Service Information

The family of Austin Harm Hellman created this Life Tributes page to make it easy to share your memories.

Send flowers to the Hellman family.