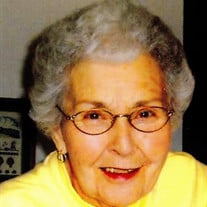 Princeton – Berniece Lucille Anderson, 98, passed away on Monday, May 13, 2019 at Heritage Health in Walnut, IL. She was born in Missouri on October 21, 1920. She met her future husband, Clifford Anderson while a student at Wyanet High School. They celebrated 71 years of marriage before Cliffords passing in 2013. Lucille was trained as a secretary and worked in Chicago for two years before returning to Bureau County to marry and raise three children as the couple farmed. Her secretarial skills were well used as she later worked for P.A.G./Cargill in rural Walnut, IL. She was active in the Ohio Methodist Church, was a 4-H Leader and enjoyed Women’s Club activities. She was an ever-present spectator at her children’s sports and music events. She enjoyed crocheting, sewing and gardening. Lucille is survived by her three children, son Larry (Kathy) Anderson of Walnut, IL and daughters, Virginia (David) Bangert of St. Louis, MO and Gayla Hylland of Glen Ellyn, IL; four grandchildren, David (Tina) Anderson, Heather (Stu) Vincent, Amy (Beau) Harp and Matt Hylland; nine great grandchildren, Katy, Luke, Troy and Jillian Anderson, Spencer and Tyler Vincent and Drew, Ellie and Sophie Harp. She was preceded in death by her parents, Guy and Oreta (Wood) Eyer; her husband Clifford Anderson (2013); one sister, Helen Linden; one son-in-law, Gary Hylland. There will be no visitation, the family will be holding a private gravesite service. Memorials may be directed to the family to be distributed to Lucille’s favorite charities. The family wish to thank the staff at Heritage Health for the loving care given to our mom – “The lady with the beautiful smile.” online condolences may be left at www.norbergfh.com Arrangements by Norberg Memorial Home, Inc.

Princeton &#8211; Berniece Lucille Anderson, 98, passed away on Monday, May 13, 2019 at Heritage Health in Walnut, IL. She was born in Missouri on October 21, 1920. She met her future husband, Clifford Anderson while a student at Wyanet... View Obituary & Service Information

The family of B. Lucille Lucille Anderson created this Life Tributes page to make it easy to share your memories.