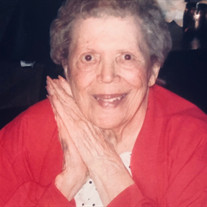 Princeton - Barbara Anne Hansen (Traynor) passed away quietly on Wednesday, February 12, 2020 at Aperion Care in Princeton, IL. She was 91 years old. Barbara was born in Princeton on September 2, 1928 to Samuel T. Traynor and Anne M. Traynor (Bouxsein). She attended Princeton schools throughout her childhood and graduated from Princeton High School in 1946. After high school, she attended the University of Illinois extension school in Galesburg for one year before transferring to Eureka College in Eureka, IL to study journalism. She graduated from Eureka in 1952. She and her first husband lived in Chicago briefly relocating to Danville, IL when she accepted a position as the women’s editor for the Danville Commercial News. She was a founding member of the Danville Light Opera and performed in many musicals, made costumes, did props and wore many hats for the organization. While in Danville, she met and married her second husband and welcomed her first child, Karin, into the world in 1967. They moved to Princeton in 1968 and opened a store on Main St. called “The Collection.” In 1971, she welcomed her second child, Kristian, into this world. Not long after, Barbara became the children’s librarian at Matson Public Library and held that position for more than 20 years. As the face of the children’s library she encouraged multiple generations of young readers to celebrate and cultivate their love of reading and books. In addition, she worked as a reporter for the Bureau County Republican and, after retiring from the library, became the museum director at the Bureau County Historical Society. Barbara loved life so very much. She loved to read and play games; she did crossword puzzles and played Scrabble with her lifelong friend, Clay Skinner, for decades. She and her children often sat up late at night playing three handed Pinochle. Barbara played bridge and was involved in the Homecoming Festival musical productions for many years. She used to do a Friday morning story time spot on WZOE for the library, participated in storytelling conventions and was a proud member of the hand bell choirs at both Hampshire Colony Congregational Church and the Methodist church. She originally wanted to be an artist and interior designer and never lost her love of sketching little pictures, especially elaborate floor plans, garden layouts and decorative schemes. She loved chocolate, peanut butter, going out to dinner and to the movies. She loved music and theatre and made frequent trips to the city with her friends and her children to visit museums, see shows and have adventures. Barbara was fun, sweet, funny, intelligent, caring and utterly and completely one of a kind. Her children and her grandchildren were the lights of her life and it would be impossible to quantify her love for them. She is survived by one daughter Karin Elizabeth Hansen (Chicago), one son, Kristian Rex Hansen (Princeton), a daughter in law, Michelle Moss Hansen (Princeton) and her grandchildren Bjorn and Anika Hansen (Princeton). She was preceded in death by her parents, grandparents and many aunts and uncles. Barb will be missed by many and the world was a little brighter with her energy, curiosity and kindness in it. In lieu of flowers memorials may be directed to the Princeton Public Library. Services will be held at Hampshire Colony Congregational Church on Saturday, February 22 at 11:00am followed by graveside services at Elm Lawn cemetery. Pastor David Barnes will officiate. Arrangements made by Norberg Memorial Home Inc. and Monuments. Online condolences may be left at www.norbergfh.com.

The family of Barbara Anne Hansen created this Life Tributes page to make it easy to share your memories.

Send flowers to the Hansen family.