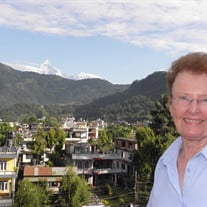 Princeton - Barbara C. LaVelle, 88, passed away in the early hours of Thursday, November 26, 2020 at Aperion Care Princeton. Barbara was born on July 14, 1932 in Buffalo, New York to Justin and Ione Cash. She was raised in Kansas City, Missouri where she graduated from Southwest High School. She earned a degree in sociology from DePauw University in Greencastle, Indiana. Working in market research for Proctor & Gamble. She later traveled around Europe for several months with girlfriends, breaking out to work at a summer camp in Switzerland to help finance the trip. Upon returning to Kansas City, Barbara met and married her husband, H. Stanley (Stan) LaVelle. They had two children, H. Stanley, Jr. and Margaret (Margie) Ellen. In 1968, the family moved to Princeton, IL where they leased and then purchased the Skelly truck stop. She is pre-deceased by Stan senior in 1982, and Stanley junior in 1996. She is also pre-deceased by her parents and her brother, Justin Cash Jr. Barbara loved Princeton and was very active in civic and volunteer endeavors. In the 1980s, she served on the Princeton Planning Commission and was the first woman elected to its city council. She was a passionate volunteer for the League of Women Voters, Friends of the Library, Perry Memorial Hospital Foundation and other local groups. She was also an active parishioner at St. Louis Catholic Church. She was also very curious about the world and interested in other people and their cultures. She traveled to all seven continents and over 50 countries. She also enjoyed gardening, golfing and tennis. Barbara is survived by her daughter, Margie and her husband Paul Gater. She is also survived by her sister, Margaret Dillon, and her nieces and nephews. Due to the pandemic, services will be held at a later date. Memorials may be directed to the Davis Phinney Foundation for Parkinsons, the League of Women Voters or the charity of your choice. Online condolences and memorials may be directed to www.norbergfh.com Arrangements by Norberg Memorial Home, Inc. & Monuments.

Princeton - Barbara C. LaVelle, 88, passed away in the early hours of Thursday, November 26, 2020 at Aperion Care Princeton. Barbara was born on July 14, 1932 in Buffalo, New York to Justin and Ione Cash. She was raised in Kansas City, Missouri... View Obituary & Service Information

The family of Barbara C LaVelle created this Life Tributes page to make it easy to share your memories.

Send flowers to the LaVelle family.