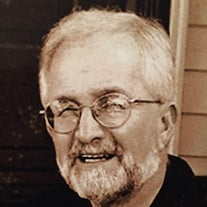 Princeton - Bartlett Lee Kassabaum, 73, of Princeton, passed away Tuesday, January 12, 2021 at OSF St. Francis Medical Center, Peoria, IL. Mass of Catholic Burial will begin at 1 pm Saturday, January 16 at St. Louis Catholic Church in Princeton with Father Timothy Hepner officiating. Burial to follow at the Elm Lawn Cemetery in Princeton. Military Rites accorded. Visitation for Bartlett will be held on Friday, January 15, 2021 at Norberg Memorial Home, Inc. & Monuments from 4:00 p.m. to 6:00 p.m. The visitation line will be honored, restrictions apply, facemask required. Bart was born on July 26, 1947 in Spring valley, Illinois, the second of 9 children of Marilyn (Kunkel) and Charles H. Kassabaum. Bart was reared in Granville and graduated Hopkins High School in 1965. He served in the Army as a Spec. 5 Communication member from 1968 through 1971. Bart worked as an artist for Josten’s for 5 years illustrating medallions, rings, and charms. In 1982 he married Connie McMahon and has stated many times how his best work was his son, Mark, born 1985. Throughout his life he was a member of various organizations like the Jaycees, Elks, Moose, the Illinois Valley Wildlife Committee, Princeton Arts Committee which was responsible for “Art in the Park” held for years in June for various years. Bart was an active member of the Bureau County Daycare Board, 1987-1997, and was involved with the construction of the present Zearing Childhood Center. He was a member of the Princeton’s Rediscovering Richard Widmark Group. Being very instrumental in having the Richard Widmark star and plaque installed in the Princeton Walk of Fame in front of the Apollo Theater. On a less serious note, Bart was an audience participant of the infamous concert, “Woodstock.” Among his many passions were the outdoors, landscaping projects, music, and his ardent love of family. Bartlett Lee Kassabaum worked as a full-time professional artist for almost 45 years after leaving Josten’s. He was a self-taught artist and enjoyed working in many mediums including watercolor, gouache, acrylic, graphite, color pencil, and mixed media. He had 99 of his original works in print. Bart’s works were mainly of landscapes, wildlife, and local scenes, but he also loved different projects as a change of pace. One such project was painting his first Duckstamp picture on the botton of a patron’s pool. A dedicated and accomplished artist, Bart Kassabaum’s work has been recognized for many achievements and awards. He had three direct purchase awards and two commissions by the state of Illinois, had his art presented to three governors, won four Illinois Duck Stamp competitions for the hunting stamp in 1980, 1983, 1985, and 1987. He also had placed sixth in the National Duck Stamp competition. Bart’s patriotic art, “No Free in Freedom,” featuring two World War veterans, Charles H. Kassabaum, his father, and pilot John C. Dove, were featured in his design for the country music CD by Derik Scumacher out of Nashville in 2005. The art of Bartlett Kassabaum has raised over $150,000 for different charitable causes during his career. Bart wrote, illustrated and published his first book, Becoming Richard Widmark, and his second book in 2020 just before his death, Becoming Bureau County. In lieu of flowers, memorials may be directed to the Princeton Public Library, the Bureau County Genealogical Society and St. Louis Catholic Church of Princeton, IL. Bart is survived by his wife of thirty-eight years, Connie, his son, Mark and his wife, Bridget; brothers and sisters, Craig Kassabaum of Peoria, Patti (David) Shimmin of Normal, Sherry (Ralph) Hastings of Bryan, Texas, Kurt Kassabaum, Carole (Ernest) Terando, Blane (Melissa) Kassabaum, all of Granville, and numerous nieces, nephews, and cousins. Bart was preceded in death by his parents and two younger brothers, Mark of Granville, and Gary of Apple Valley, California. Online condolences and memorials may be left at www.norbergfh.com Arrangements are being made by Norberg Memorial Home, Inc. and Monuments, Princeton, Illinois.

The family of Bartlett Lee Kassabaum created this Life Tributes page to make it easy to share your memories.

Send flowers to the Kassabaum family.