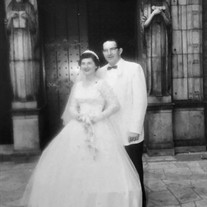 Princeton – Betsy L. Park, 86, of Princeton, Illinois passed away on Monday, January 7, 2019 at OSF St. Francis, in Peoria, IL. Betsy was born in Chicago, IL on August 31, 1932 to Otto and Maria (Poslusny) Lahoda. She was a graduate of University of Miami, receiving her degree in optometry. She worked with Lee Optical at J C Penny’s and Sears, retiring after 34 years. She married the late Thomas Park on August 22, 1955 in Chicago, IL. They started their family and after his passing on December 20, 1970, she moved the family to Princeton in 1974. She enjoyed traveling with her late cousin, Gerri Hurst. Traveling to such places as Europe, Alaska and the entire South West. She moved to Grand Rapids, MN where she lived with her sister and opened a second hand shop called “Auntie Joans Attic” a name given to her by her cousins. She moved back to Princeton in 2009 to live with her son Mike and finally really retire. She was a fan of all Chicago sports teams, especially the Chicago Black Hawks. Her favorite thing to do was spend time with her family. Betsy is survived by one son, John (Tina) Park – Hubert, NC; seven grandchildren, Jennifer, Emily, Nicole, Amber, Abigail, Harley and Shannon; seven great grandchildren, Taylor, Bailey, Ryleigh, Alexis, Ella, Dalton and Corbin; and one sister, Marylew Lindell - Forest Lake, MN. She is preceded in death by her parents, husband Thomas Park, three children, Thomas Park, Kathleen Park and Michael Park (01/24/2019); and her favorite dog Meja. In lieu of flowers, memorials may be directed to the family. A celebration of life for both Betsy and her son, Michael who passed away on January 24, 2019, will be held at Norberg Memorial Home, Princeton, IL on Friday, February 15, 2019 from 4:00 p.m. to 7:00 p.m. Services for Betsy and Mike will be held on Friday, February 15, 2019 at Norberg Memorial Home, Princeton, IL at 7:00 p.m. officiated by Father Daniel Gifford of Saint Louis Catholic Church. Friends are welcome to share a story after the service. Burial for Betsy and Mike will be on Saturday, February 16, 2019 at Queen of Heaven Cemetery, 1400 S. Wolf Rd, Hillside, IL, at noon. Online condolences may be left at www.norbergfh.com Arrangements by Norberg Memorial Home, Inc.

The family of Betsy L Park created this Life Tributes page to make it easy to share your memories.

Send flowers to the Park family.