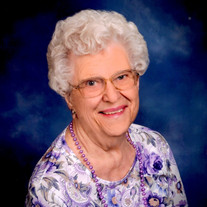 Princeton – Betty Jane (Roehlke) Becker, age 97 of Princeton passed away peacefully on Saturday, October 31, 2020. Betty was born to Emil and Nettie (Desens) Roehlke on February 22, 1923 in Forest Park, IL. She was the oldest of three children. She attended St. John’s Lutheran School in Forest Park and graduated from Proviso Township High School. She loved attending class reunions from her Alma Mater. She worked in downtown Chicago in public service at Commonwealth Edison Company during World War II. When the war ended, all the female employees were let go to make room for all the men who were coming back from the war. She married her childhood friend, Raymond Franklin Becker on May 11, 1946 at St. John’s Lutheran Church in Forest Park, IL. He preceded her in death on January 19, 2008. During their years in Chicago suburbs, they had a group of friends that called themselves the OFF (out for fun) club. Those friendships remained their entire lives. When Betty’s boys were young, she was a homemaker and involved in the boy’s activities. She was a Cub Scout Leader for their dens. In 1960 the family moved from Lydon Township, Illinois to Princeton where Betty and Ray were owner/operators of the Coast to Coast Store in Princeton from 1960-1987. During those years they made many lifelong friends of the other merchants on Main Street. They were also able to take many wonderful trips with the Coast to Coast Organization. Betty was an active member and past president of the Business and Professional Women. Betty was proud to be a Princetoneon and often reflected on how many years she and Ray made this their home. In the years they lived in Princeton, they raised their boys, celebrated the weddings of their sons, welcomed grandchildren and great grandchildren. The years added up to 60, many of which were spent on South Church St. one block from the Coast to Coast store. She was a member of the First United Methodist Church of Princeton and in the Ruth Circle of the United Methodist Women. Betty experienced many changes in her long life from living during the great depression, to black and white TV, color TV, cable TV, to automatic dishwashers, microwaves and cell phones. Perhaps the new thing in her life that she was most intrigued by was ZOOM. She loved the opportunity to see her family that lived far away. She never really got over the amazement of being able to interact with her family virtually. She was known by many names: wife, mom, grandma, sassy grandma, sister, treasured aunt, friend and Mrs. B. She was so very proud of her family. We are so blessed that we were loved by her for so many years. Betty is survived by her two sons, Jack (Janet) Becker of Princeton, IL and Bruce (Marsha) Becker of Dalton Gardens, ID; six grandchildren, Brent (Jessica) Becker, Michelle (Chris) Bechanan, Erin (Matt) Usher, Heidi (Scott) DeHaan, Bradley (Kelsey) Becker and Kirk Becker; eight great grandchildren, Emma and Tanner Crews, Zachary and Tyler Becker, Bryce, Austin, Landon and Paxton Bechanan; one brother, Marvin (Karen) Roehlke of Bloomingdale, IL. She was preceded in death by her husband Ray, her parents and one sister Edna Wendt. In lieu of flowers memorials may be directed to the First United Methodist Church of Princeton or the Princeton Fire Department. Private graveside services will be held for immediate family members only. Online condolences and memorials may be directed to www.norbergfh.com Arrangements by Norberg Memorial Home, Inc. & Monuments.

Princeton &#8211; Betty Jane (Roehlke) Becker, age 97 of Princeton passed away peacefully on Saturday, October 31, 2020. Betty was born to Emil and Nettie (Desens) Roehlke on February 22, 1923 in Forest Park, IL. She was the oldest of three... View Obituary & Service Information

The family of Betty R Becker created this Life Tributes page to make it easy to share your memories.

Send flowers to the Becker family.