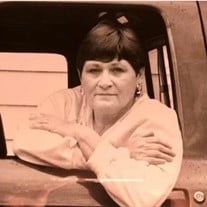 Princeton – Beverly A. Winters, 82, of Princeton, IL, passed away at Perry Memorial Hospital on Thursday, December 31, 2020. Beverly, lovingly referred to as Bev her entire life, was born on September 19, 1938 to the late John and Marjorie (Hamm) Martin in Kewanee, IL. She was a graduate of LaMoille High School, Class of 1957. Bev married John Winters on May 12, 1990 in Reno, NV. She worked various positions including being a care taker, a line worker at Harper Wyman, driving a truck (a job she really enjoyed), and as a cleaning lady. She was a member of the CMA (Christian Motorcyclist Association) and also of the Bethel Baptist Church in Princeton, IL. Bev loved crafting. She was incredibly creative and imaginative. She could sew just about anything including clothes for the family, doll clothes and Barbie doll clothes. She enjoyed taking pictures and was quite talented at is. She loved to travel, why she enjoyed her time driving a truck so much. It allowed her a glimpse of the world. She was an excellent cook and baker, one of the family’s favorites was her pan fried chicken. Her family was most important to her and she adored each and every one of them, but nothing compared to her grandchildren and great grandchildren. She is survived by her husband of 30 years, John Winters of Princeton, IL; four children, Dolores (Jeff) Briggs of Princeton, IL, Dianna (Michael) Spanos of Spring Valley, IL, Kitty (Rick) Walmer of Merrill, WI and Steven Patterson of Princeton, IL; one step-daughter, Laurel (Robert) Svoboda of Ottawa, IL; fourteen grandchildren, Neoma Eichelberger, Paul Briggs, Bradley Briggsd, Amanda Degrush, Ashley (Christopher) Manzo, Michaela Spanos, MacKenzie Spanos, Michael (Ashley) Walmer, Christoina Walmer, Shawn Walmer, Jessie (Anthony) Hedberg, Alex Patterson, Nathan Svoboda and Matthew Svoboda; five great grandchildren, Wyatt, Makenna, Iliana, Emery and Gabriella; one sister, Connie Minerary; as well as several nieces, nephews and cousins. Preceding her in death are her parents John and Marjorie Martin, and one son in infancy, Jeffery Lynn. A Celebration of Life will be held at a later date. In lieu of flowers, memorials may be directed to the family for charitable distribution. Online condolences and memorials may be left at www.norbergfh.com Arrangements by Norberg Memorial Home, Inc. & Monuments.

Princeton &#8211; Beverly A. Winters, 82, of Princeton, IL, passed away at Perry Memorial Hospital on Thursday, December 31, 2020. Beverly, lovingly referred to as Bev her entire life, was born on September 19, 1938 to the late John and Marjorie... View Obituary & Service Information

The family of Beverly Ann Winters created this Life Tributes page to make it easy to share your memories.

Send flowers to the Winters family.