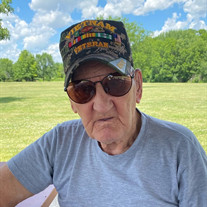 Princeton - Bobby E. Johnson 82, of Princeton passed away on Thursday, November 12, 2020 at Perry Memorial Hospital. Bobby was born in Cave City, KY to the late George and Emma (Lucas) Johnson. He married Glenda Cathelyn on June 22, 2002 at his brothers Thomas home. He enlisted in the US Army and served from 1962 to 1966. He worked for the City of Princeton in the street department for many years. He was a member of the First United Methodist Church and enjoyed assisting where needed with his church family. He was a huge NASCAR fan and a true blue Dale Earnhardt fan for life. There were days in his life that he wanted quiet and it was always on race day. He enjoyed the stock car races at the bureau County Fair Grounds and liked riding his motorcycle. He was a big movie buff and his favorite was always a John Wayne movie. Though he was an ornery old cuss, who knew just about everything, he was kind, genuine and loving and loved spending time with his family, especially his grandchildren. Bobby is survived by his wife, Glenda; four children, Rhonda (Red) Johnson of OK, Lori Nelson of MN, Robert (Tina) Johnson of VA and James (Ashley) Johnson of ND; two step children, Kelly (Brandon) Smith and Stephen Philhower; twelve grandchildren, Ethan, Aiden, Lauren, Brianna, Damian, Abby, Courtney, Michael, Emily, Allena, Cameron and Nathan; two great grandchildren, Cooper and Aiden; eight siblings, Kenneth Johnson, Roy (Sherrie) Johnson, Thomas Sneed, Deena Sneed, Tim (Susan) Sneed, John (Judy) Sara, Margaret Bennett and Danny (Kathy) Johnson; his mother and father-in-law, Gordon and Marilyn Townsend; two brothers-in-law and three sisters-in-law. He is preceded in death by his parents, George and Emma Johnson, one sister, Dorothy Scholes, two brothers, Leon Johnson and Donald Johnson, one stepson, Daniel Philhower, three sister-in-law, Ruby Sneed, Pat Johnson and Michelle Dant, as well as his four legged loyal companion, Daisy. A visitation will be held on Saturday, April 10, 2021 at the First United Methodist Church from 9:30 a.m. to 10:00 a.m., Services to follow at 10:00 a.m. officiated by Pastor Ryan Sutton. In lieu of flowers, memorials may be directed to the family for charitable distribution. On line memorials and condolences may be left at www.norbergfh.com Arrangements by Norberg Memorial Home, Inc. & Monuments.

The family of Bobby E Johnson created this Life Tributes page to make it easy to share your memories.

Princeton - Bobby E. Johnson 82, of Princeton passed away on...