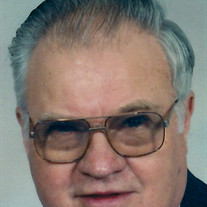 PRINCETON — Caleb “Tippy” R. Towne Sr., 85, of Princeton passed away Monday, Sept. 4, 2017, at the Illinois Veterans Home in LaSalle. He was born Sept. 15, 1931, to Edward and Marie (Argubright) Towne at Peoples Hospital in Peru. He married the former Marlene Ryba July 12, 1958, in the Oglesby Union Church in Oglesby. He graduated from LaSalle-Peru High School in 1949. He served as a corporal in the US Army during the Korean War as an interrogator and Spanish interpreter. He was a tool and die maker at Westclox until 1980, then retired from Caterpillar in 1998. He was also part owner of Towne Egg Factory. After retirement he was a Walmart greeter for seven years. He was an active member of Christ Community Church (former First Baptist Church) in Princeton for 53 years. He was also a 65-year member of Oglesby American Legion Post 0237. Surviving are his wife, Marlene Towne; one son, Caleb (Lisa) Towne Jr. of Tiskilwa; one daughter, Carla Towne of Princeton; five grandchildren, Richard, Joe, Tara, Earl and Baily; 10 great-grandchildren; two sisters, Janet Small and Marie (Edgar) Phillips of Waltham; and one brother, James (Sharon) Towne of Peru and several nieces and nephews. He was preceded in death by his parents; one sister, Suzie Pinter; one brother, Jerry Towne; one niece, Candy Phillips and one brother in law, Norman Small. Services will be at 10 a.m. Saturday, Sept. 16, at the Norberg Memorial Home in Princeton with Pastor Brian Strom officiating. Burial will be in Elm Lawn Memorial Park in Princeton. Cremation was accorded. Visitation will be from 4 to 6 p.m. Friday, Sept. 15, and from 9:30 to 10 a.m. Saturday at the funeral home. In lieu of flowers, memorials may be directed to the Illinois Veterans Home/LaSalle or Christ Community Church. Online condolences may be left at www.norbergfh.com.

The family of Caleb R. Towne Sr. created this Life Tributes page to make it easy to share your memories.