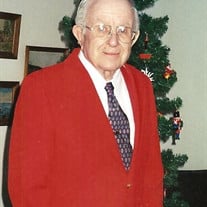 Calvin Frank Johnson 1925-2007 Funeral service for Calvin Frank Johnson, age 82 of Princeton, will be Thursday, Dec 13, 2007 at 10:00 AM at the First Presbyterian Church. Rev. Bea Hoover-Mulvany will officiate. Burial will follow in the Oakland Cemetery after the luncheon. The family will receive friends on Wednesday, Dec 12, 2007 from 5:00 PM to 7:00 PM at the Norberg Memorial Home. Mr. Johnson passed away on Friday, Dec 07, 2007 at Perry Memorial Hospital. He was born on Jun 21, 1925 in Chicago, Illinois to Carey and Leone (Van Mechelen) Johnson. He attended public school in Princeton and graduated from Princeton High School in 1943. In WWII he was in the United States Marine Corps and participated in action at Iwo Jima from February 24, 1945 to March 16, 1945. He also participated in the occupation of China from Dec. 10, 1945 to April 6, 1946. He was a Bandsman in the Third Marine Division. He married Lillian M. Kjar on May 12, 1984 in Ida Grove, Iowa, she survives. He graduated from Western University in Kalamazoo, MI in 1949. He attended graduate school at the University of Iowa, John Marshall, and Northwestern University. He was employed by Chicago Title and Trust in 1952 in Chicago and later purchased the assets of Bureau County Abstract and Title Company in July 1967, in Princeton. From that time on he resided in Princeton and operated the business, until he sold it to First American Title Insurance Co., at its present location on Oct. 4, 1999 at which time he retired. Calvin was a licensed Illinois real estate broker since 1967 and past director Ilini Valley Real Estate Board. He organized Home Builders of Illini Valley and served as their first President in 1969. He was past director and State President of Illinois Land and Title Association and served on several state committees. Locally he was a member of the American Legion, Elks, Moose, Booster Club, and the Chamber of Commerce. He was elected City Commissioner from 1971 - 1975. He was a longtime member of the Bureau Valley Country Club and an active member of First Presbyterian Church. He is survived by his wife Lillian Johnson of Princeton, his children Kerrie Johnson of Bakersfield, CA and Kevin Johnson of Princeton, step-sons Erik McCorkindale of Princeton and Dean McCorkindale of TX. Also surviving is his mother-in-law Bertha Kjar of IA and sister-in-law Claire Johnson of OR. Surviving as well are many other sisters and brothers-in-law, nieces and nephews. He was preceded in death by his parents and twin brother Watts C. Johnson. Memorials may be directed to the First Presbyterian Church or the donor's choice.

Calvin Frank Johnson 1925-2007 Funeral service for Calvin Frank Johnson, age 82 of Princeton, will be Thursday, Dec 13, 2007 at 10:00 AM at the First Presbyterian Church. Rev. Bea Hoover-Mulvany will officiate. Burial will follow in the... View Obituary & Service Information

The family of Calvin Frank Johnson created this Life Tributes page to make it easy to share your memories.