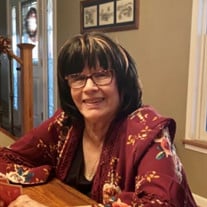 Princeton – Carol R. Chaplik, 75, of Princeton, IL passed away on Monday December 14, 2020. Carol was born in Chicago, IL to the late Allen and Jeanette (Simmons) Malnekoff on March 30, 1945. She was a graduate of Evanston Township High School, Class of 1962. She also received her Master’s Degree in Counseling from Northeastern Illinois University in 1997. Carol worked as the Human Resources Director for IRCON for over 25 years. After leaving IRCON, Carol took contract work in Human Resources for the United States Government, as she staffed security personnel for airports, retiring in 2010. She especially enjoyed doing this work in New York. She loved her cats Stella and Ricky and they brought her much joy. Carol collected owl figurines, and she grew her owl collection over many years. She loved music and was an accomplished pianist. She was an avid reader, and one of her favorite authors was Stephen King. She was a Lost TV series super fan according to her daughters, Jennifer and Laura. Carol enjoyed watching musicals, and Singing in the Rain and Carousel were among her favorites. Carol loved anything that challenged her mind from logic problems to crossword puzzles. She enjoyed the works of Thomas Kinkade the painter and collecting miniatures of just about anything. Carol was a breast cancer survivor and a mother who loved her family. She liked to dance whenever music was played and enjoyed being fun and silly. She loved her children, grandchildren, family and friends, and will be sadly missed. Carol is survived by her two daughters, Jennifer (Ron) Katz of Gurnee, IL, Laura (Charlie) Loch of Peru, IL; three grandchildren, Alex Martorano, Ashley Martorano, and Rebecca Katz; one sister, Sandy Gertzfield. She is preceded in death by her parents, Allen and Jeanette Malnekoff, and one sister, Lynn Malnekoff. In lieu of flowers, memorials may be directed to the Perry Memorial Breast Cancer Center. A private graveside service will be held for Carol on Wednesday, December 23, 2020 at Elm Lawn Cemetery, Princeton, IL. officiated by Rabbi Jennifer Kuvin. Online condolences and memorials may be directed to www.norbergfh.com Arrangements by Norberg Memorial Home, Inc. & Monuments.

Princeton &#8211; Carol R. Chaplik, 75, of Princeton, IL passed away on Monday December 14, 2020. Carol was born in Chicago, IL to the late Allen and Jeanette (Simmons) Malnekoff on March 30, 1945. She was a graduate of Evanston Township... View Obituary & Service Information

The family of Carol R Chaplik created this Life Tributes page to make it easy to share your memories.

Send flowers to the Chaplik family.