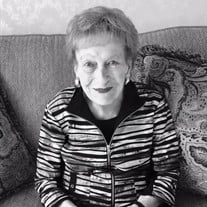 Catherine Joan Smith of Princeton, Illinois, formerly of Ohio, Illinois, died at 3:25 PM, December 17, 2017 at St. Francis Hospital, Peoria, Illinois. Visitation will be held from 4 PM until 7 PM Thursday, December 21, 2017 at Norberg Memorial Home in Princeton. Mass of Christian Burial will be held on Friday, December 22, 2017 at 10:30 AM at St. Louis Catholic Church, Princeton. Reverend Daniel Gifford will officiate. Burial will be in St. Mary's Cemetery, Ohio. Mrs. Smith was born November 23, 1927 in Kewanee, Illinois to James Patrick and Grace C (Code) McManus. She married Dr. Russell Smith on August 11, 1950, in Wyoming, Illinois. She was a 1945 graduate of Toulon High School and attended Western Illinois University. Mrs. Smith assisted her husband in the operation of his veterinary practice for many years. She was a faithful volunteer at her Catholic parishes and was a Catechism instructor and member of the Council of Catholic Women. Most importantly, she was a devoted Wife, Mother of seven, and Grandmother to her cherished grandchildren and great-grandchildren. She was preceded in death by her husband, Russell, daughter, Cathy Lovgren, son-in-law Thomas Healey, granddaughter Christina Healey and daughter-in-law, Nancy Smith. Survivors are six children, Mark Smith (Rick Drummond) of Tampa, Florida, Jim (Wendy) Smith of Davenport, Iowa, Mike (Doris) Smith of Princeton, Mary (Rodney) Mills of Bettendorf, Iowa, Timothy (Aggie) Smith of Princeton and Thomas (Carol) Smith of Princeton; fourteen grandchildren; twenty-six great-grandchildren, one great-great grandchild; and brother-in law Dale Smith of Rochester, Minnesota. She will also be missed by her faithful and loving Dachshund, Rusty. Memorials may be directed for Mass Intentions for Mrs. Smith and to St. Louis Catholic Church in Princeton or Immaculate Conception Church in Ohio. Online condolences may be left at norbergfh.com

The family of Catherine Joan Smith created this Life Tributes page to make it easy to share your memories.

Send flowers to the Smith family.