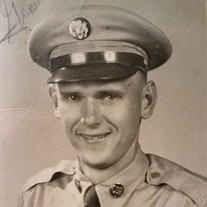 Princeton – Cecil E. Enbom, 89, of Princeton, IL. passed away on Friday, October 19, 2018 at Perry Memorial Hospital surrounded by family. Cecil was born on January 20, 1929 to the late Arthur O. and Loretta (Miller) Enbom on the family farm in Ohio, IL. He was a graduate of Ohio High School Class of 1947. He spent some time working on the family farm after graduation until he was drafted in 1952. He served in the United States Army becoming a corporal from 1952 to 1954 where he was stationed in Germany and France. He ran missions for the United States Army protecting European boarders and was very proud to have served. After being honorably discharged, he met his forever love, the late Gloria Smith. They married at the Kasbeer Community Church, Kasbeer, IL. on June 11, 1960. He worked for ten years at Harper Wyman. He then worked for LCN for 28 years, retiring in 1992 to care for his beloved Gloria. Cecil, lovingly nicknamed “Bill” by his siblings, was a member of the NRA and a member of the Kasbeer Community Church where he served on the board and council. He spent many years hunting, trapping and searching for ginseng. He was selfless and cared so deeply for others. He was a wonderful son, husband, father, grandfather and dutiful brother. Cecil was a traditional man who held his highest values as his love of God, country and family. He is survived by his two children; Diana Enbom – Princeton, IL. and David (Kathy) Enbom – Princeton, IL. one grandchild; Ryan Enbom – Milwaukee, WI. and four sisters; Darlene Moore – Pontiac, IL. his twin sister, Lucille Smith – Ohio, IL. Evelyn Olin – Princeton, IL and Shirley (Clifford) Smith – Princeton, IL. Cecil is preceded in death by his parents, his loving wife, Gloria, one sister; Jeanette Moore, two brothers; Orville Enbom and Everett Enbom, one sister-in-law; Ruth Enbom, and four brother-in-laws; Lloyd Moore, Harry Smith, Joe Moore and Burt Olin. Visitation will be held on Friday, October 26, 2018 at Norberg Memorial Home, Princeton, IL. from 4 p.m. to 7 p.m. Services for Cecil will be held on Saturday, October 27, 2018 at 11:00 a.m. at Norberg Memorial Home, followed by a graveside service at Elm Lawn Memorial Park, Princeton, IL. In lieu of flowers, the family has asked that donations be made directly to the family for charities of their choosing. Arrangements by Norberg Memorial Home, Princeton, IL. Online condolences may be left at www.norbergfh.com

Princeton &#8211; Cecil E. Enbom, 89, of Princeton, IL. passed away on Friday, October 19, 2018 at Perry Memorial Hospital surrounded by family. Cecil was born on January 20, 1929 to the late Arthur O. and Loretta (Miller) Enbom on the family... View Obituary & Service Information

The family of Cecil E Enbom created this Life Tributes page to make it easy to share your memories.

Send flowers to the Enbom family.