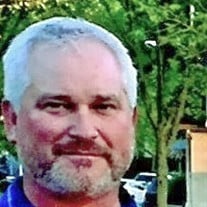 Princeton - Chad A. Monier, 48, of Princeton, IL passed away in the early morning hours of Saturday, May 22, 2021. Chad was born on February 21, 1973 to Steve Monier and Cecilia Monier Jortz, in Princeton, IL. He was a graduate of Princeton High School, Class of 1991. He was very active in sports while in high school, playing football, baseball, and basketball. He was very proud to have been a part of the PHS football team making it to the State Playoff's in 1989. He worked for McDonald Trucking in Ohio, IL until 1998 as a driver. He became an iron worker for the Local 498 Union out of Rockford, IL until 2018. He came back to Princeton to work and help out on the family farm, something he loved his entire life and grew up doing. Chad enjoyed golfing and always managed to find one of his many friends to go play a round or two. He had the ability to fix or make almost anything, and was always helping friends and family with projects. He was very social and made friends everywhere he went. Chad enjoyed spending time with his friends and family. He was adored by his nieces and nephews. He would tease them endlessly and they loved him for it. He was the fun dad and uncle. He enjoyed the outdoors, and spent hours with his family, boating, snowmobiling, riding four wheelers, and pulling sleds. Chad had several memorable trips he shared with his sons, Jacob and Eli. He helped coach soccer, and basketball and loved watching his sons play all sports. He was quite the grill master and one of the family's fondest memories were their Sunday Morning Breakfast with his homemade waffles. He played softball and was a fan of all the Chicago teams, Bears, Cubs, Bulls and Black Hawks. He was a kind person, a lover of life and the outdoors, who will be greatly missed by all who knew him. He is survived by his two sons, Jacob Monier and Eli Monier both of Dixon, IL; his father and stepmother, Steve and Shelly Monier of Princeton, IL; his mother and stepfather Cecilia and Jim Jortz of Wisconsin; two brothers, Joe (Stephanie) Monier and Chris (Tiffany) Monier; A very special Uncle, Randy Handson; his former wife and mother of his sons, Jynell (Hermeyer) Monier; as well as numerous nieces, nephews and cousins. Chad is preceded in death by grandparents, one brother, Michael Monier (Oct 22, 2018). In lieu of flowers, memorials may be directed to the family for charitable distribution. A visitation will be held on Thursday, May 27, 2021 at Norberg Memorial Home, Inc. & Monuments from 4:00 p.m. to 7:00 p.m. Services for Chad will be Friday, May 28, 2021 at Norberg Memorial Home, Inc. & Monuments, at 11:00 a.m., Officiated by Pastor Derek C. Boggs. Cremation rites accorded. Online memorials and condolences may be left at www.norbergfh.com Arrangements by Norberg Memorial Home, Inc. & Monuments.

Princeton - Chad A. Monier, 48, of Princeton, IL passed away in the early morning hours of Saturday, May 22, 2021. Chad was born on February 21, 1973 to Steve Monier and Cecilia Monier Jortz, in Princeton, IL. He was a graduate of Princeton... View Obituary & Service Information

The family of Chad A Monier created this Life Tributes page to make it easy to share your memories.

Send flowers to the Monier family.