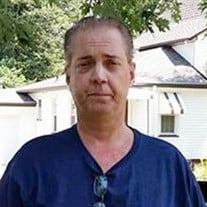 PRINCETON — Charles “Chuck” Edward Rowe Jr., 53, of Princeton passed away Wednesday, July 3, 2019, at OSF St. Francis in Peoria from intestinal complications. He was born in Streator on May 26, 1966, to Alberta Rose Rayburn. He married the late Tammy Lynn (Holms) Rowe in Lacon, IL on November 13, 1991. He worked in construction and drove semi trucks, and also loved carpentry and ’80s music. He was a devoted, loving husband, father and grandfather and cherished his family above all else. He is survived by his two sons, Daniel Edward Rowe and Darryn Charles Edward Rowe; three grandchildren, Amelyia Marie Lynn Rowe, Kratos Diablo Rowe and Maximus Charlee Wyatt Rowe; two sisters, Carol Bornsheuer and Joyce Barajas; and two brothers, William Rowe and John Halley. He was preceded in death by his brother, David Lee Crank; his daughter, Danielle Marie Rowe; and his wife, Tammy Lynn (Holms) Rowe. Visitation will be from 10 a.m. to noon Friday, July 12, at the Norberg Memorial Home in Princeton. The family encourages everyone to wear casual clothes, because that is how Charles would have wanted it. Private burial services will be held at a later date and time. Arrangements by Norberg Memorial Home, Inc. Online condolences may be left at www.norbergfh.com

The family of Charles Edward Rowe created this Life Tributes page to make it easy to share your memories.

Send flowers to the Rowe family.