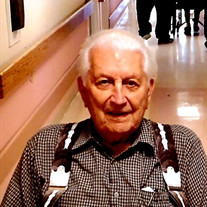 PRINCETON — Charles B. Smith, 95, passed away Friday, Sept. 6, 2019, at Liberty Village in Princeton. He was born halfway between Arlington and 5 Points on Barefoot Road in Berlin Township on March 17, 1924, to Charles Asa Smith and Verna Ethel (Hubbard) Smith. Charlie walked 1 1/2 miles to attend a one-room schoolhouse, Jay School, for eight years. When he was 9, he would drive his older sister, Eileen, to Malden High School, five miles away from his home, return home, and then would walk to the Jay School. He later attended Malden High School. During the Great Depression, Charlie would spend his summers working for Henry Hildebrand to earn room and board. He did this from the age of 9 to 17. He milked cows, ran the cream separator and helped make fence. At the age of 14, he began going on threshing runs with a team of broncos. He was one of 101 people from Bureau County in the first 18- to 19-year-old draft for World War II. He was a Tech 4 medic in the U.S. Army. He worked as a medic in England at the 186th General Hospital and also participated in the Battle of the Bulge. He received three Overseas Service Bars, an American Campaign Medal, the European African-Middle Eastern Theater Ribbon, a Good Conduct Medal and a World War II Victory Medal. On April 6, 1947, Charlie married the love of his life, Dorothy Bickett Smith, in LaSalle. They recently celebrated 72 years of marriage. He worked at Champion Pneumatic in Princeton and as a furnace installer for Sears. Charlie was a self-employed handyman for many years. He developed a love of cars and machines at a young age. In his spare time, Charlie could be found in his garage restoring cars. He restored a 1946 Hudson pickup, a 1933 Plymouth PB Sedan, a 1968 Gran Sport 400 Convertible and his pride and joy, a 1922 Nash 7 Passenger Touring car. He would spend many weekends driving his old cars in parades and participating in car shows. He was a member of the Wyanet Old Car Club, the Princeton Moose Lodge and the American Legion. In 2011, he participated in an Honor Flight to Washington, D.C. He is survived by his wife, Dorothy Bickett Smith, and one daughter, Judith (David) Smith Brown of Princeton; a sister, Margie (Don) Christensen of Peru; his grandchildren, Shelli Smith, Charles Jay Smith, Kelli Smith Wenglewski, Randy Smith, Lisa Smith May and Shana Brown; 13 great-grandchildren; 16 great-great-grandchildren; and one great-great-great-grandchild. He was preceded in death by by two sons, Charles “Chuck” Smith and Dennis Smith; his sister, Eileen Schwab; and his brothers, Don Smith, Melvin Smith and Ivan Gene Smith. Services for Charlie will be at 10 a.m. Thursday, Sept. 12, at the chapel at Oakland Cemetery in Princeton, followed by a graveside service with full military honors, officiated by Pastor Frank Gervasi. Pallbearers will be David Brown, Charles Jay Smith, Randy Smith, Jon Damaschke, Samuel May, Mitchell May, Steven May and Larry Jones. In lieu of flowers, memorials may be directed to the Princeton American Legion. The Norberg Memorial Home in Princeton is handling arrangements. Online condolences may be left at www.norbergfh.com.

PRINCETON &#8212; Charles B. Smith, 95, passed away Friday, Sept. 6, 2019, at Liberty Village in Princeton. He was born halfway between Arlington and 5 Points on Barefoot Road in Berlin Township on March 17, 1924, to Charles Asa Smith and... View Obituary & Service Information

The family of Charles B Smith created this Life Tributes page to make it easy to share your memories.

Send flowers to the Smith family.