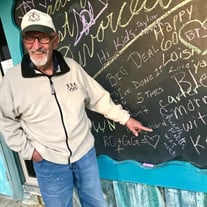 Princeton – Charles D. “Buzz” Putts, 83, of Princeton passed away on Monday, August 3, 2020 at his son’s home in Peoria, IL, surrounded by his loved ones. Buzz was born on January 7, 1937 to Lawrence and Alma (Frees) Putts in Oak Park, IL. He was a graduate of Northern Illinois University with a degree in Educational Industrial Arts. He married the late Judith “Judy” Giffrow on June 21, 1969 in Downers Grove, IL. He started his teaching career at LaGrange High School, spending some time also teaching at Ohio Illinois High School and retiring from Earlville High School in 2003. He had a few jobs in between, one being Houlihan's Lumber where he was able to put his woodworking skills to the test and he also spent some time as part owner of Pleasant Lanes Bowling Alley. He was a member of St. Matthews Lutheran Church as well as Princeton Bowling Association Hall of Fame. He enjoyed bowling, fishing, and camping. Anything to do with his hands, that’s how his love of wood working came about. He loved to take reclaimed church pews and turn them into the most magnificent pieces, from bunkbeds for his girls or a table for his son. He enjoyed family vacations, playing cards, jumble puzzles, gambling and golfing. He had an amazing sense of humor, never met a stranger and could get a smile out of anyone. His greatest creation was his family and he will be missed by all who knew him. Buzz is survived by his five loving children, Charles Putts, Jr. of Mississippi, Dawn Strom of Tennessee, Matt Putts of Peoria, IL, Andrea (Sanford III) Leake of Washington State and Mel (Grant) Pinter of Sherman, IL; nine grandchildren; one brother, Larry (Mary Ann) Putts of Indiana and his best friend of over fifty years, LM Woody Woods of Princeton, IL; his beloved loyal companion his dog Buddy. He is preceded in death by his parents, Lawrence and Alma Putts, his wife, Judy Putts (01-02-2015), and one son Brandon Putts. In lieu of flowers, memorials may be directed to the family for charitable distribution. A visitation for Buzz will be held on Monday, August 10, 2020 at Norberg Memorial Home, Inc. & Monuments from 9:00 a.m. to 11:00 a.m. (A procession to the church for services from Norberg’s will be at 11:20 a.m.). Services will be held at St. Matthews Lutheran Church in Princeton, IL on Monday, August 10, 2020 at 12:00 p.m. officiated by Reverend Scott Schmidt. Cremation rites will be accorded. A private burial will take place at a later date and time. Internment will take place on Friday, August 28, 2020 at 1:30 pm at Oakland Cemetery, officiated by Reverend Scott Schmidt. Online condolences and memorials may be left at www.norbergfh.com Arrangements by Norberg Memorial Home, Inc. & Monuments.

The family of Charles "Buzz" Douglas Putts created this Life Tributes page to make it easy to share your memories.

Send flowers to the Putts family.