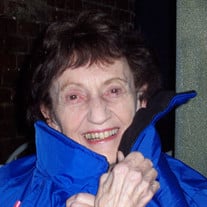 Claire Johnson LAKE OSWEGO, Ore. — Claire H. Johnson, 83, of Lake Oswego, Ore., died on Sunday, Feb. 17, 2008. Born Aug. 17, 1924 in Philadelphia, Pa., to Ethel C. and William A. Hayes, she married Watts C. Johnson of Princeton in June 1950. He died in 2003. Her family moved to Chicago in 1930 where she entered St. Matthew’s Grade School. She graduated in 1942 from St. Thomas the Apostle High School and was a member of the National Honor Society. She graduated from DePaul University in 1948 with a degree in sociology and a minor in Spanish after having attended Rosary College in River Forest for one year, as well as St. Xavier's College and Northwestern University. She completed her work at DePaul while working full-time for Northwest Airlines as a reservations agent. Upon graduating, she spent seven months working for the Army in Germany during the Berlin airlift. After returning to this country, she worked as a social worker with Chicago Public Welfare. She moved to Princeton in 1951, and after raising her children, went back to school to get her teaching credentials and spent 20 years teaching in the Princeton School system. Survivors include five children, Gregory (Michèle) Johnson of San Francisco, Calif., Philip (Yan Lin) Johnson of Beijing, China, Carolyn (Mark) Pihl of Portland, Ore., Brian (Julie) Johnson of Berkeley, Calif., Barbara Johnson of Tualatin, Ore.; one sister, Ann (Maurice) Connors of Villa Park; eight grandchildren, Oliver Johnson, Gabriel Johnson, Ariane Johnson, Andrew Johnson, Caitlin Pihl, Madison Pihl, Eli Johnson, and Bowen Johnson; nephews Kevin Johnson of Princeton and Neal Connors of Belleville; niece Kerrie Johnson of Bakersfield, Calif., great-nephew Cole Connors and great-niece Carmen Connors. Mass will be at 10 a.m. Friday at St. Louis Catholic Church, Father Ed Harkrader and Father Jeffrey Stirniman officiaiting. Burial will be in Oakland Cemetery. Visitation will be from 5 to 7 p.m. today, Thursday, at Norberg Memorial Home. Donations can be made to St. Louis Catholic Church in Princeton in her memory.

The family of Claire H. Johnson created this Life Tributes page to make it easy to share your memories.