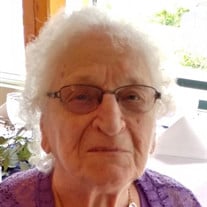 Buda – Clara A. Turner, 86, of Buda, IL, passed away on Tuesday, November 5, 2019 at her home. Clara was born on August 9, 1933 to the late Bert and Opal (Watson) Day in Senachwine Township, IL. She was a graduate of Henry High School Class of 1951. She married the late Leland Turner on January 21, 1956 in Bradford, IL. She was a farmer's wife from 1956 to 1965 then worked as a Ward Clerk at Perry Memorial Hospital for the next 34 years. The job she enjoyed the most though was being a Mom and homemaker. She was a member of the Kasbeer Community Church where she was involved in women's ministries and the nursery - she loved holding the babies. She was a teacher at Kids Klub for many years. In the last few years she attended Bradford First Baptist Church where she enjoyed being an Awana Leader. Clara loved to read and sit on her porch surrounded by flowers and watch the hummingbirds come to her feeder. She was quite the seamstress and could sew anything. She loved spending time with her children and grandchildren most of all. She is survived by son-in-law, Doug Kline and children - Cassandra and Joel Kline; Daughter, Karen (Kevin) Dean and children - Patrick (Erin) Dean and son Oliver, Candace (Adam) Chitwood and sons Aidan, Liam and Cillian, and Whitney Dean; Daughter, Carolyn (Jeff) Barron and sons - Brady (Hailey), Brant and Bryce; Son Kevin Turner and daughters - Kalee (Oscar) Shingleton and daughters Morgann, Hialeah, Mycah (Justin Embry) Carter and children Neveah, Hayden and Dominic; two brothers, Louis (Eileen) and Richard (Edna) Day, two sisters, Barb (Jim) Dorsam and Bonnie (Don) Ague. Clara is preceded in death by her parents, her husband Leland (06-04-2015), daughter Linda Kline (05-01-2017), great- granddaughter, Lily Joy Chitwood and sister, Carol Edens. In lieu of flowers, memorials may be directed to the Kasbeer Community Church or Bradford First Baptist Church. A celebration of life will be held at the Kasbeer Community Church on Saturday, December 7, 2019 at 2:00 p.m. Officiated by Mark Graves and Pastor Siebert. A private burial will be held at a later date and time. Arrangements by Norberg Memorial Home, Inc. & Monuments Online condolences may be left at www.norbergfh.com

The family of Clara A Turner created this Life Tributes page to make it easy to share your memories.

Send flowers to the Turner family.