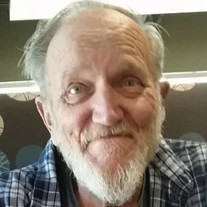 Princeton – Clifford L. “Cliff” Bohm, 80, went Home to be with the Lord Tuesday, October 27, 2020, at Liberty Village in Princeton, IL. Cliff was born in Walnut, IL on April 3, 1940, to the late Lester and Leta (Chambers) Bohm. He spent his childhood years helping on the family farm, in 1958 he graduated from Walnut High School, after high school he joined the National Guard. In 1961 on May 6th he married the love of his life, Virginia Anderson, where they started their lifelong honeymoon. He built, owned and operated the Dover Greenhouse as well as Dover Upholstery. He was also self-employed with his son Carl at APEC Builders and Electrical Contractors. He was a long-standing member of the Dover Congregational Church, where he served as a deacon. He enjoyed gardening, sewing, working with his hands, he was truly a jack of all trades and could do anything. He loved to share his faith and was a man of the Lord. He enjoyed attending church and being involved in the community, spending many years as the Mayor of Dover. He loved to bake, cook, build and read, his favorite thing of all, was spending time with his children, grandchildren, and his beloved wife Virginia. Cliff is survived by his three children, Chrissi Linker of Dover, IL, Carl Bohm of Astatula, Florida and Fonda (Richard Erwin) Bohm of Bureau, IL; two grandchildren, Brittney (Brandon Allen) Erwin and Ashley Erwin, and many others whose lives he touched, including a very special young man, Jayson Tuntland. He is preceded in death by his parents, Lester and Leta Bohm, his wife, Virginia Bohm (02/15/2005), one grandson, Christopher Bohm, and his dog sent from Heaven, Buddy. In lieu of flowers, memorials may be directed to the family. Private services will be held at a later date and time. On line condolences and memorials may be left at www.norbergfh.com Arrangements by Norberg Memorial Home, Inc. & Monuments.

The family of Clifford L Bohm created this Life Tributes page to make it easy to share your memories.

Send flowers to the Bohm family.