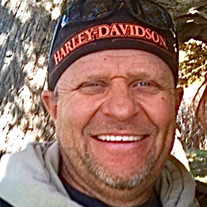 Princeton - Craig Allan Sluis, 64, of Princeton, Illinois, passed away Monday, November 25th, 2019 at Perry Memorial Hospital. Craig was born on June 24, 1955 in Chicago, Illinois, to Norman and Virgina (Taylor) Sluis. He was a graduate from Princeton High School in 1974. He was passionate with his work and started his business, Princeton Trailer Repair, in 1976 where he grew it to be one of the most reputable business within our community. He is survived by his former wife of 35 years, Dawn (Rod) Sluis, his son, Daniel Sluis, of Henry, daughter Kimberly Sluis, of Princeton, and twins, Jordan (Erin) Sluis of Normal and Tori (Josh) Anderson of Rio, WI. He is the loving grandfather to five grandchildren, Corbin Sluis, Mia Sluis, Olive Nichols, and Benjamin and Luke Anderson. He is also survived by his best friend, Payton (his shop dog), as well as his sister, Deb (Tom) McKenney, and many nieces and nephews. Craig was preceded in death by his parents, Virginia and Norman Sluis, his son, Joseph Sluis, sister, Barbara Tiedeman, and brother, Richard Sluis. He was known for his love of football and a die-hard fan of the Chicago Bears. He also enjoyed road trips on his Harley to about anywhere you could imagine. Craig was highly active in horse showing, rib cooking, wrestling and cub scouts - even being a Cub Master. He most certainly was a jack of all trades and could build and make anything he had his mind set to. Craig was a family man and worked very hard to give his time and support to be there for each. He is loved and will be missed very much by all who knew him. A celebration of life will be held on Saturday, December 14th, 2019, from 1:00 to 6:00pm at the Ye Olde Underground Inn in Princeton. In lieu of flowers, memorial donations may be made to Craig’s choice of charity, St. Jude Children’s Hospital or support to the family can be sent to Norberg’s Funeral Home. Arrangements by Norberg Memorial Home, Inc. & Monuments Online condolences may be left at www.norbergfh.com

The family of Craig A Sluis created this Life Tributes page to make it easy to share your memories.

Send flowers to the Sluis family.