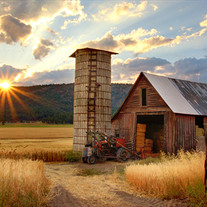 Princeton - Dale Leroy Borg, 80, of Princeton, IL passed away at OSF Saint Clare Medical Center in Princeton on Monday, October 4, 2021. Dale, lovingly referred to as Doc from his previous days as a chiropractor was born in Peoria, IL on February 2, 1941 to the late Oscar and Marguerite (Charles) Borg. He was a graduate of Tiskilwa High School, Class of 1959. Doc enrolled in Palmer College of Chiropractic, he graduated in 1962 with a degree, Doctor of Chiropractic's and spent a brief time working as a Chiropractor in Camden, SC. During his time in Palmer, he married the love of his life, Sharon Gower on August 11, 1961 at the Tiskilwa Baptist Church. He also attended IVCC to become an electrician. He worked as an electrician for BF Goodrich in Henry, IL for 38 years, until he retired. Upon retirement, he still wanted to stay busy and took on a few days a week working at Ace Hardware in Princeton. After retirement, Doc and Sharon moved to Tennessee, a place he had always dreamed of living. After living there for 4 years, they missed the quiet streets of Princeton and decided to move back and spend out their days near family and friends. Doc, never really sat still, he took up woodworking as a hobby and made his daughter Dawn and most of his granddaughters handmade hope chest. He loved to cook on the grill and cook in his smoker, according to his son Kevin, his ribs were the best ribs ever. He loved gardening and growing his own vegetables and flowers. His time spend with his grands and family, were his favorite. He loved his church family and was a man of faith and will be missed by many. He is survived by his bride of 60 years, Sharon Borg of Princeton, IL; two children, a son, Kevin (Shelly Krolak) Borg of Spring Valley, IL and a daughter, Dawn (Tom) Molitor of Cicero, IN; five grandchildren, Kaytlyn (Josh) Nunez, Lindsey (John) Hernandez, Brandy Molitor, Nick Borg and Alexis Borg; four great grandsons, Johnny, Ryder, Michael and Mateo. Doc was preceded in death by his parents, Oscar and Marguerite Borg, one son, Scott Borg, two sisters, Marion Bickett and Doris Whitfield, as well as his very special four-legged loyal companion, Star Charm, who passed away on September 4, 2013. A visitation for Doc will be held on Friday, October 8, 2021 at the First United Methodist Church in Princeton, IL from 10:00 a.m. to 11:00 a.m. Services will be held Friday, October 8, 2021 at 11:00 a.m. Officiated by Pastor Ryan Sutton at the First United Methodist Church, followed by graveside services at Oakland Cemetery in Princeton, IL. In lieu of flowers, memorials may be directed to the Cystic Fibrosis Foundation or the First United Methodist Church of Princeton, IL. Online condolences and memorials may be directed to www.norbergfh.com Arrangements by Norberg Memorial Home, Inc. & Monuments.

Princeton - Dale Leroy Borg, 80, of Princeton, IL passed away at OSF Saint Clare Medical Center in Princeton on Monday, October 4, 2021. Dale, lovingly referred to as Doc from his previous days as a chiropractor was born in Peoria, IL on... View Obituary & Service Information

The family of Doc created this Life Tributes page to make it easy to share your memories.

Send flowers to the Borg family.