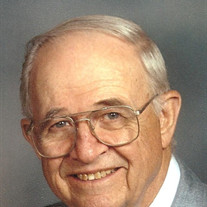 Dale Olof Espel 1927-2007 Funeral service for Dale Olof Espel, age 80 of Princeton, will be Friday, Dec 28, 2007 at 2:00 PM at the First Lutheran Church of Princeton. Pastor Norman Femrite and Rev. Barbara Ollila will officiate. Burial will follow in the Oakland Cemetery. The family will receive friends on Friday, Dec 28, 2007 from 12:30 PM to 2:00 PM at the First Lutheran Church of Princeton. Mr. Espel passed away on Monday, Dec 24, 2007 at Perry Memorial Hospital. He was born on Jun 10, 1927 in Princeton, Illinois to Olof and Amy (Polson) Espel. He graduated from Princeton High School in 1944 and was in the US Navy during WWII. After the war he attended the University of Illinois. On February 11, 1951 he married Shirley Venell at Zion Lutheran Church in Kewanee. She preceded him in death on December 5, 2007. Dale farmed in the Princeton area and later worked for the Farm Bureau as a manager in Kane and Menard County. He was a life long member of the Farm Bureau. He was an active member of First Lutheran Church of Princeton and an associate member of Calvary Lutheran Church in Park Rapids, MN. Dale was heavily involved in activities with multiple churches during his life. He also helped at the Closet in Princeton and delivered for Meals on Wheels. Dale is survived by his children: Larry (Cynthia Hasselbusch) Espel of MN, Mary Lynne (Kenneth) Payne of ME, Amy (Gary) Haut of Lockport, Timothy (Ann) Espel of Hampshire, Thomas (Carolyn) Espel of ND, and Susan (James) English of Bolingbrook. Also surviving are 16 grandchildren and one sister, Doris Carlson of Princeton. He is preceded in death by his parents, his wife, his sisters Julia Espel, Jeannette Townsend, Ina (Lane) Schwingle, Iva Hawkins and one brother Lloyd Espel. Donations in lieu of flowers are preferred. Please direct donations to the First Lutheran Church in Princeton.

The family of Dale Olof Espel created this Life Tributes page to make it easy to share your memories.

Send flowers to the Espel family.