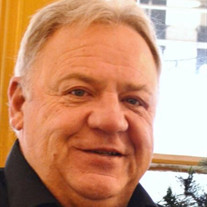 Princeton – Dan M. Ziegler, 62, from Princeton, IL passed away on Saturday, February 29, 2020, at his home, in his recliner, surrounded by his family. Which is exactly the way he wanted it. Dan was born on July 8, 1957 to Louis and Ruth (Noyes) Ziegler in Princeton, IL. He was a graduate of Princeton High School, Class of 1975. He married Georgene Budach on September 1, 1978 at the 1st Lutheran in Princeton, IL. He started out working at Eagles grocery store as a stocker before he started his own business, Ziegler’s & Son’s carpet cleaning. He was a master at his craft. He was a member of the Princeton Chamber of Commerce, Moose Lodge and the Aruba Swamp Monkeys. He enjoyed working. Even if he would have won the lottery, Dan would have found some way to clean carpets. He took great pride in his work and it showed. He loved grilling out with family and friends, watching a funny You Tube video and enjoying a bag (or case) of beef jerky. You would never catch him without it. He loved camping at the Hi-Tide in Leland, IL and socializing. He just really loved people and good conversations. He and his family also loved traveling to Aruba, a place that he had gone to sometimes twice a year. He adored his family and spending time with his grandbabies who were the light of his life. Dan is survived by his loving wife of 41 years, Georgene Ziegler of Princeton, IL; his mother Ruth Ziegler of Tiskilwa, IL; three sons, Aaron (Kelssi) Ziegler of Prairie Du Chien, WI, Adam (Heather) Ziegler of Princeton, IL and Daniel (Kristi) Ziegler of Princeton, IL; two grandchildren Gabby and Damien; his mother-in-law, Eva Coats of Princeton, IL; two brothers, Ronnie (Charlotte) Ziegler and Larry (Paula) Ziegler; one sister-in-law, Michele Ziegler; as well as several nieces, nephews and cousins and his beloved furry friend, his dog Mia. Preceded in death by his father, Louis Ziegler, and two father-in-law’s, George Budach and Richard Coats. In lieu of flowers, memorials may be directed to the family. A visitation will be held at Norberg Memorial Home, Inc. & Monuments on Monday, March 9, 2020 from 10:00 a.m. to 11:30 a.m. A private family service will follow as well as private burial. The family ask that you respect Dan’s wishes regarding this matter. Online condolences may be left at www.norbergfh.com Arrangements by Norberg Memorial Home, Inc. & Monuments.

The family of Dan M. Ziegler created this Life Tributes page to make it easy to share your memories.

Send flowers to the Ziegler family.