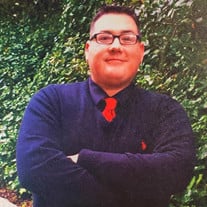 Katy, TX - Daniel Dean Lemus, 41, formerly of Princeton, IL passed away on Monday, October 18, 2021 in Katy Texas at the Memorial Hermann Katy Hospital. Daniel was born on April 29, 1980 at Perry Memorial Hospital in Princeton, IL to Nanette Wright (now Sterling). Daniel's stepfather, Kevin Sterling, came into his life at the age of 4 and was always "Dad" to Daniel. He was a graduate of Princeton High School, Class of 1999. He married his love Lisa Barr, whom he had met while in Louisiana. They had a whirlwind courtship as they knew immediately that "they" were the one for each other. They married on the beach in Long Beach, Mississippi on June 19, 2011. He was good at many jobs, and always tried to find his fit: from butcher, to construction and everything in between. He enjoyed working with computers so he enrolled at the ITT Technical Institute. He received his Associates Degree in Networking Administration and started working for the Ross Corporate Headquarters, where he worked for the past four years before his passing. Daniel enjoyed playing cards and was a member of the Aces Cracked Entertainment Poker League, he liked to gamble and was quite good at it. He loved to watch football, GO BEARS, Playing X-Box and collect anything regarding Transformers or GI Joe. He was quite the cook and soon became the grill master extraordinaire. He loved spending time with Lisa, who went where ever Daniel went. Daniel loved his son Cole and would spend much time bragging about him. He loved his nieces and nephews and treated them as his own. Then there are his fur babies, who he doted over constantly. He is survived by his wife of 10 years, Lisa Lemus of Katy, TX; his son Cole Sissel of Wyanet, IL; his parents, Kevin and Nanette Sterling of Princeton, IL.; his mother and father-in-law Bob and Debbie Barr of Concord, CA; grandmother Jennierose Houston of Tiskilwa, IL; three brothers, Jeremy Sterling, Ryan Sterling and Jon (Erica) Sterling; one sister, Jenn (John) Ryan; seven nieces, Beatty, Michaela, Ella, Isabelle, Charlie, Dakota and Vivianne; three nephews, Dakota, Jon-Jon and Ayden; his fur babies, Beefy, Sissy, Noelle and Peewee; as well as numerous Aunts, Uncles, cousins and in-laws. Daniel is preceded in death by his grandparents, Stanley and Nancy Wright, Don Houston, an uncle, Roger Sterling, and one sister-in-law, Raechael Sterling and two fur babies, Charles and Belle. In lieu of flowers, memorials may be directed to Daniel's family. A visitation will be held on Saturday, October 30, 2021 from 10:00 a.m. to 12:00 p.m. at Norberg Memorial Home, Inc. & Monuments. Services for Daniel will be at Norberg Memorial Home, Inc. & Monuments following visitation on Saturday, October 30, 2021 at 12:00, officiated by Pastor Janice Ringenberg. Burial to follow at the Boyd's Grove United Methodist Church Cemetery in Bradford, IL. Online memorials and condolences may be directed to www.norbergfh.com Arrangements by Norberg Memorial Home, Inc. & Monuments.

The family of Daniel D Lemus created this Life Tributes page to make it easy to share your memories.

Send flowers to the Lemus family.