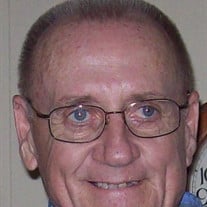 PRINCETON — Daniel K. May, 68, of Princeton passed away Thursday, June 22, 2017, at the Richard L. Owens Hospice Home in Peoria. Danny was born March 4, 1949, in Princeton to Glenn C. and Vivian (Miller) May. He attended Princeton High School. Danny married Bettie Jo Hensel on June 30, 1990. He was best known for operating May's Cigar Store and May Lawn Care. He had many skills and talents. He loved spending time with his grandchildren, woodworking and working on model cars. Danny is survived by his wife; two sons, Bradley (Susan) May of Peru and Eric (Christine) May of Shorewood; one stepson, Jared (Heather) Shepard of Englewood, Colo.; eight grandchildren, Gracie May, Eastin May, Ambria May, Camden May, Madison Shepard, Makenzie Shepard, Marleigh Shepard and Maddex Shepard; and three siblings, Jack (Jackie Neahring) May, Sandy (Bill) Brown and Janice Isaacson, all of Princeton. He was preceded in death by his parents; one stepson, Brett Shepard in 2012; and one brother in infancy. Funeral services will be at 10 a.m. Wednesday, June 28, at the Norberg Memorial Home in Princeton with the Rev. William Shields officiating. Burial will follow at Oakland Cemetery in Princeton. The family will receive friends and family from 4 to 7 p.m. Tuesday, June 27, at the funeral home. Memorials may be directed to the family. Online condolences may be left at www.norbergfh.com.

The family of Daniel May created this Life Tributes page to make it easy to share your memories.

PRINCETON — Daniel K. May, 68, of Princeton passed away Thursday,...

Send flowers to the May family.