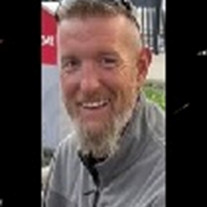 Princeton - Darren W. Frank, 39, of Princeton, IL. passed away on Wednesday, October 13, 2021, at OSF St. Clare in Princeton, IL. Surrounded by his loved ones. Darren was born in Princeton, IL to Dennis (Cheryl) Frank and Tamara (Jim) Yarger on October 19, 1981 at Perry Memorial Hospital. He was a graduate of Bureau Valley High School, Class of 1999. He was introduced to the love of his life, Staci Smith by his friend Jill Kuhne. As soon as he met Staci he was head over heels. They had a whirlwind romance and moved in together within two months of meeting and married thirteen months later on February 15, 2014 at the Grand Bear Lodge in Utica, IL. He worked all of his life as a truck driver. A profession passed down from his father Dennis, because he wanted to be just like his dad. He started driving at the age of 18 and would drive from coast to coast. He had worked for Keith Arterberry Transportation, for the past four years. Darren loved to travel and spend time on the road, seeing all the beautiful sites the United States had to offer. Via big rig or Harley, he loved to travel. He and Staci just returned from a motorcycle trip to the East Coast visiting Main, Vermont, New York and New Hampshire. He loved the West, definitely a favorite destination for him. In 2020 he and Staci spent a week riding in Colorado. They already had the plans on the books to travel to Sturgis and Yellow Stone in 2022. Unfortunately due to his passing, his best friend of over 23 years, Brad Carlson will make sure that trip still happens. He loved animals, especially his dog Jasper, a yellow lab, who passed away in July of 2020. A subject Darren couldn't even talk about without tearing up. He absolutely adored his family and always considered Staci's boys "His Boys" his favorite times were spent with Staci, on the bike, riding down a winding road with the wind in his hair and a smile on his face. He is survived by his wife, Staci Frank of Princeton, IL; her sons, also known as his boys, Griffin Orr and Mason Orr, both of Princeton, IL; one daughter, Felicia Frank of North Carolina; his father Dennis (Cheryl) Frank of Princeton, IL; his mother, Tamara (Jim) Yarger of Kewanee, IL; one brother, Andy (Amanda) Frank of Kewanee, IL; his paternal grandfather, Lowell (Darlene) Frank of Princeton, IL; his mother-in-law, Barbara Smith of Princeton, IL; two nieces, Hadley Frank and Haidyn Frank and one nephew, Levi Frank; and his dog Journey. Darren is preceded in death by his paternal grandmother, Mary Frank, his maternal grandparents, Gilbert and Georgie Philhower, one brother in infancy, Jeremy Frank and his favorite four legged sidekick, Jasper. In lieu of flowers, memorials may be directed to the family for charitable distribution. A memorial service will be held on Sunday, October 17, 2021 at the Bureau County Metro Center from 10:00 a.m. to 2:00 p.m. Online memorials and condolences may be directed to www.norbergfh.com Arrangements by Norberg Memorial Home, Inc. & Monuments.

The family of Darren W Frank created this Life Tributes page to make it easy to share your memories.

Send flowers to the Frank family.