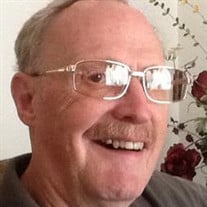 Princeton- David F. Boesch 72, of Princeton, passed away on Monday, February 6, 2017 at Perry Memorial Hospital in Princeton. David was born on July 26, 1944 in Moline, IL to Urban Henry and Marion C. (Schaecher) Boesch. He married Barb Swanson on August 21, 1965. He worked at Hyster in Kewanee, and Lines and Letters in Princeton. He enjoyed yardwork, landscape, and traveling. He is survived by his wife; three sons, Troy Boesch of Philadelphia, PA; Scott (Emily) Boesch of Champaign, IL; Lee (Jessica) Boesch of Fayetteville, GA; and grandchildren, Benjamin, Daniel, Alex, Henry, Jack, Sam, Hazel, Grace, Vanessa and Tyler. David was preceded in death by his parents; and one sister, Cynthia Boesch. The family will receive friends on Friday, February 10, 2017 from 10 a.m. until noon. Funeral services will take place after the visitation on Friday at noon at the Norberg Memorial Home in Princeton. Father Stirniman will officiate. Burial will take place at a later date. Cremation has been accorded. Memorials may be directed to the Parkinson’s Foundation. https://support.pdf.org/ Online condolences and tributes may be left at norbergfh.com

The family of David F. Boesch created this Life Tributes page to make it easy to share your memories.

Princeton- David F. Boesch 72, of Princeton, passed away on Monday,...

Send flowers to the Boesch family.