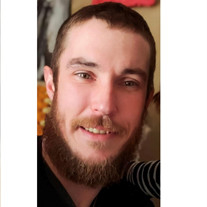 Princeton – David Thomas Lyon, 35, of Princeton, IL passed away on Friday, April 10, 2020. David also known as Keebs, was born to Thomas Lyon and Yvonne (Billings) Savoie on June 3, 1984. He attended Princeton High School and graduated from Christian Liberty Academy, Class of 2002. He married Samantha Hand on July 30, 2013 in Rolling Meadows, IL. He began working at Prime Quarter in Princeton while still in high school, doing a little bit of everything and ending up being one of the chefs before moving on to Electronic Engineer in Mylan, IL. Shortly thereafter he started his railroad career. First working for DMNE Rail Road then Canadian Pacific as the Construction Supervisor. He was a very hard worker from a young age. He was a member of the First Baptist Church when he was younger and loved going on the mission trips. He loved fixing things, anything he could take apart and put back together, he would even get excited at Christmas knowing he would have to assemble his children’s toys. He enjoyed golfing as well as disc golfing. He was a true “Deadhead”. David loved going to concerts and music festivals with his bride Sam, family and friends. He loved movies and video games, D & D and Star Wars. He would say, his best memories were spent with family and friends and he always had a smile on his face. David is survived by his wife of six years, Samantha (Hand) Lyon; his three children, William, Barrett and Hazel all of Princeton, IL; his father, Thomas Lyons of Mineral, IL; his mother Yvonne (Micheal) Savoie of Princeton; one sister, Deanna (Jason) Lyman of Princeton, IL; his father and mother-in-law, James and Pamela Hand of Princeton; his sister-in-law, Stephanie Hand and her partner, who was also Davids best friend, Clint Masters, both of Wyanet, IL; five nephews and one niece. He was preceded in death by his grandparents, Marshall and Joan Lyon and one grandmother, Joan Herink. In lieu of flowers, memorials may be directed to Samantha for his children’s college education trust. These donations may be make online also at www.norbergfh.com in the upper right corner where it says “pay online”. There will be a drive thru visitation on Thursday, April 16, 2020 at Norberg Memorial Home, Inc. & Monuments from 9:00 a.m. to 12:00 p.m. A family service will be held at Norberg Memorial Home, Inc. and Monuments as well as livestreamed via Facebook private group Norberg Memorial Home Memorial Service Group (see link below), Thursday, April 16, 2020 at 1:00 p.m. officiated by reverend Terry Lancaster. https://www.facebook.com/groups/Norbergmemorialhomememorialservicegroup/ please be sure you join the group prior to services. Please sign the online guest book and feel free to share a message or photo for the family at www.norbergfh.com Arrangements by Norberg Memorial Home, Inc. & Monuments.

The family of David T Lyon created this Life Tributes page to make it easy to share your memories.

Send flowers to the Lyon family.