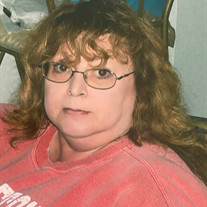 Princeton - Debbie Ann (Tovrea) Lange, 62, passed away on Tuesday, June 15, 2021 at Perry Memorial Hospital in Princeton, IL, surrounded by her loving family after a hard fought battle with cancer. Debbie was born on April 5, 1959 to the late Daniel and Edna (Seibert) Tovrea in Ottawa, IL. She was a graduate of Princeton High School, Class of 1977. She married Glenn Lange on April 17, 1991 at the Bureau County Court House. She worked at Harper Wyman until they closed, then she studied and got her CNA Certification and worked at Prairie View Nursing Home until they closed. She worked at Colonial Hall until she had to take early retirement due to medical complications in 2019. She was an active member of the Princeton Moose Lodge for many years including Moose Heart. Debbie was a big time Chicago Cubs fan as well as Chicago Bears, they could probably hear her in Chicago cheering when the Cubs won the World Series. She enjoyed playing online games and watching crime dramas. If you went to visit, there was a pretty good chance that you would see NCIS, Criminal Minds or Blue Bloods playing on the television, just to name a few. She was a friend to all stray and all things with a beating heart. If anyone needed help, Debbie was quick to answer the call or assist. Don't think of offering to pay her for helping, but she would gladly accept a Mountain Dew and Cheetos, two of her favorites. When she wasn't working you could find her with her family or friends, or hanging out with her grandchildren baking cookies and telling stories. She was kind to everyone and will be greatly missed by so many. She is survived by her loving husband of 30 plus years, Glenn Lange of Princeton, IL; three daughters, Christy (Cruz Martinez) Hoffman of Amboy, IL, Kristi Eaton of New Haven, IN and Tricia (Archie) Burden of Malden, IL; seven grandchildren, Caden, Maci Jo, Brayden, Bryleigh, Arthur, Eli and Danika; one brother, Danny (Lois) Tovrea; as well as a few very special friends, Kat, Carla, Angie and Andrew Hoffman; her mother and father-in-law, Glen and Carol Lange; as well as several sister and brothers-in-law, nieces, nephews and cousins. Debbie is preceded in death by her parents, Daniel and Edna Tovrea, one brother Donnie Tovrea, her step-father Arlie Hackney and her first husband Paul Swanlund, and several cats that she had rescued. In lieu of flowers, memorials may be directed to Friends of Strays or the Illinois Valley Animal Rescue. Services will be held at a later date and time. Cremation rites accorded. Online condolences and memorials may be directed to www.norbergfh.com Arrangements by Norberg Memorial Home, Inc. & Monuments.

Princeton - Debbie Ann (Tovrea) Lange, 62, passed away on Tuesday, June 15, 2021 at Perry Memorial Hospital in Princeton, IL, surrounded by her loving family after a hard fought battle with cancer. Debbie was born on April 5, 1959 to the late... View Obituary & Service Information

The family of Debbie Ann Lange created this Life Tributes page to make it easy to share your memories.

Send flowers to the Lange family.