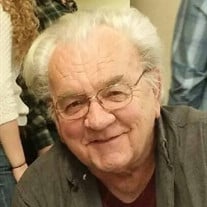 Princeton – Dennis “Dennie” K Hult, 78, of Princeton, IL passed away on Sunday, December 27, 2020 at OSF St. Francis in Peoria, IL. Dennie was born in Princeton, IL to the late Charles and Leila June (McColl) Hult on July 2, 1942. He graduated Princeton High School, where he met his wife, Kay in typing class. Dennis and his brother Mike were both in the same typing class as Kay. Dennie asked Kay out and that was all she wrote. They married on September 2, 1960 at the Methodist church in Princeton, IL. He spent most of his life as a painter. Starting out working for his father Charles and when his father retired, Dennie and his brother Mike took over the business for Hult Painting, continuing the legacy his father had created. He was a life member of the Elks Club and enjoyed working on cars. The older the vehicle the more he liked tinkering with it. In his younger days he enjoyed riding motorcycles and was a proud member of the “good ole boys club” at the Park Tavern. He forever will have a spot at the bar and now he’s enjoying a few of the boys that passed before him. He enjoyed bowling as well as softball back in the day. His favorite times were spent with his kids and grandkids having cookouts and spending holidays together. Dennis is survived by his wife Kay Hult of 60 plus years of Princeton, IL; four children, Mike (Patty) Hult of Princeton, Deb (Walt) Prostko of Princeton, IL, Patti Kelly of Princeton, IL, and Tracy (Dave) Shepard of Wyanet, IL; eight grandchildren, Megan (Royal) Rice, Amanda (Sam) Schwartz, Erin (Johnny) Reinhart, Elizabeth (Austin) Maske, Scott Hult, Samantha (Mike) Catton, Rebecca Hult, Sean Shepard; one great grandchild on the way; one brother Michael Hult of Princeton, IL as well as several nieces, nephews and cousins. He is preceded in death by his parents, Charles and Leila Hult, mother and father-in-law, Marie and Harry Jennings, one brother-in-law, Richard Jennings; one sister-in-law, Marlene Hult. Memorials may be directed to the family for charitable distribution. Online memorials and condolences may be directed to www.norbergfh.com Arrangements by Norberg Memorial Home, Inc. & Monuments.

The family of Dennis K Hult created this Life Tributes page to make it easy to share your memories.

Send flowers to the Hult family.