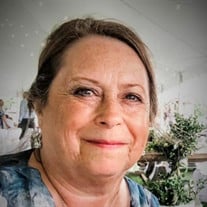 Plainfield, IL – Diana Jane Specht, 69, formerly of Princeton, IL passed away peacefully on Thursday, February 11, 2021. Diana was born in Webster City, IA on January 7, 1952 to the late William and Rosalie (Anderson) Horan. She married David H Specht on August 11, 1973 in Princeton, IL. She worked at a local florist shop as a designer before retirement. She enjoyed planting flowers and gardening. She was extremely crafty and could do just about anything. She was a fantastic baker and cook, something the grandchildren always looked forward to. She enjoyed painting and spending time with her grandchildren, family and friends. Diana is survived by her husband of 47 plus years, David Specht of Plainfield, IL; two sons, Michael (Megan) Specht of Plainfield, IL. and Daniel (Kelli) Specht of Plainfield, IL; five grandchildren, McKayla (10), Liam (8), Keegan (8), Charlie (1) and Rowan (4 months); one sister, Christine (Robert) Grant; two brothers, Mike (Debbie) Horan and Jim Horan. In lieu of flowers, memorials may be directed to the family. A memorial service will be held at Norberg Memorial Home, Inc. & Monuments on Wednesday, February 24, 2020 from 10:00 a.m. to 12:00 p.m. followed by internment at Oakland Cemetery, officiated by Pastor Ryan Sutton. Online condolences and memorials may be directed to www.norbergfh.com Arrangements by Norberg Memorial Home, Inc. & Monuments.

The family of Diana Jane Specht created this Life Tributes page to make it easy to share your memories.

Send flowers to the Specht family.