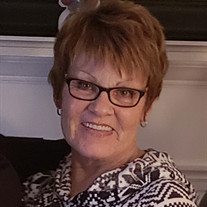 Princeton - Diane Marie (Ewing) Lucas 67, of rural Princeton, IL passed away on Friday, April 10, 2021 at OSF Hospital in Peoria, IL surrounded by her loving family. No service or visitation will take place at this time. Cremation rites have been accorded. A Celebration of Life on Clearwater Beach, Florida will be held at a later date and time. Diane was born in LaSalle, IL on April 6, 1954 to the late Robert and Margaret (Housby) Ewing. She attended LaSalle-Peru High School. She worked in the medical field as a CNA, most recently at Liberty Village of Princeton where she enjoyed her job of caring for the residents. Diane also loved spending time with her family and adored her 2 - four legged babies Lilly and Molly. Diane married Harry Lucas. He survives along with one son, Troy Heagy, one daughter, Trina Isabegovic, two grandchildren, Miranda Rodriguez and Rijad Isabegovic. Also surviving are 2 sisters - Marilyn (Bob) Prince and Roberta Jacobowski (Terri), 2 brothers -Sam Ewing & David Ewing along with many aunts, uncles, nieces, nephews and cousins. Diane was proceeded in death by her parents, Robert and Margaret Ewing, one sister, Judy Catalanello and one brother Stuart "Buddy" Ewing. In lieu of flowers, memorials may be directed to the Princeton Friends of Strays. Online memorials and condolences may be directed to www.norbergfh.com Arrangements by Norberg Memorial Home, Inc. & Monuments Arrangements by Norberg Memorial Home, Inc. & Monuments.

The family of Diane Marie Lucas created this Life Tributes page to make it easy to share your memories.

Send flowers to the Lucas family.