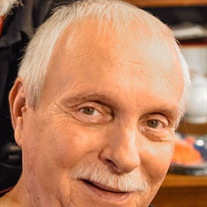 Donald “Donnie” Carlson of Malden, passed away on Sunday, April 23, 2017. Donnie was born on December 26, 1948 in Princeton to Donald and Esther (Hubbard) Carlson. He graduated from Malden High School in 1967 and was a lifelong Malden resident. Donnie married Jennifer “Jenny” Mohr on September 2, 1983 in Malden. He co-owned Mr C’s Auto Sales in LaMoille with his wife, he was employed by Browning Ford, Lilley Trucking, and Advantage Auto Sales before his retirement in 2008. He was a member of the Malden United Methodist Church. He enjoyed his family, especially his grandchildren. He could often be found working in his garage on cars or lawnmowers. He is survived by his wife; children, Dan (Nadene Carter) Carlson of Tiskilwa; Doug (Saralyn) Fletcher of Peru; and Julie (Bill Kuhne) Davis of Princeton; his brothers, Danny (Pam) Carlson of Del City, Ok.; Darrin (Lisa) Carlson of Malden; and brother in law, Bill Weems of Princeton. Also surviving are eleven grandchildren: Dylan, Taylor, JohnLuke, Darien, Isaac, Chloe, Abby, Maggie, Colton, Tanner and Payton. Donnie was preceded in death by his parents and one sister, Diane Carlson Weems. Visitation will be Saturday, April 29, 2017 from 9-11:30 am at the Norberg Memorial Home. Funeral services will follow at 11:30am at Norberg Memorial Home. Pastor Gary Brooks of Malden UMC will officiate. Online Condolences may be left at norbergfh.com In lieu of flowers, memorials may be directed to the family for distribution to Malden Community Organizations.

The family of Donald Neal Carlson created this Life Tributes page to make it easy to share your memories.

Donald “Donnie” Carlson of Malden, passed away on Sunday, April...

Send flowers to the Carlson family.