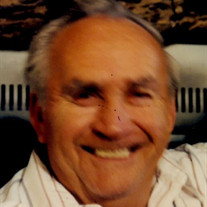 Tiskilwa – Donald Eugene Sterling Houston, 85, passed away at Perry Memorial Hospital on Thursday, November 1, 2018 surrounded by loved ones. Donald, lovingly referred to as Grumpy, was born on December 4, 1932 to Donald and Celia (Romanelli) Sterling in Seatonville, IL. He attended Tiskilwa High School and was a graduate in 1951. Immediately after graduation he joined the US Navy and served our country from 1951 to 1954. After his service he went to work at Harper Wyman, where he met the love of his life, Jenirose Sims. Don married his beloved Jenirose on November 5, 1955 at Princeton Baptist Church. Don worked as a truck driver hauling cars and he also owned his own construction company for a time, the Houston Drywall Company. He retired at the age of 70 from Purdy Brothers Trucking Company. He was the President of the Tiskilwa Snowmobile Club in its final year of operation. He enjoyed working on cars, woodworking, traveling and camping. He loved listening to country classics, especially the Generics. He enjoyed fishing and Nascar, considering himself a true Bill Elliott fan. His favorite thing to do above all was spending time with his family, especially his grandchildren. Don is survived by his adoring wife of almost 63 years, Jenirose Houston, two sons; Kevin (Nanette) Sterling and Roger (Laura) Sterling, three daughters; Karina (David) Prokes, Robin (Richard Johnsen and Renea (Robert) Robison, twenty two grandchildren; Jonathan, Jeremy, Daniel, Jennifer, Ryan, Lindsey, Ashlee, Stacy, Chloe, Harley, Rilee, Christopher, Gina, Jana, Emy, Annie, Michael, Christopher, Nathan, Justin, Jared and Jacob, two sisters; Dorothy Elmore and Patty Cabeen as well as numerous great grandchildren, nieces, nephews and cousins. He is preceded in death by his parents, Donald and Celia Sterling, one brother, Richard Sterling and a very special aunt and uncle, Tony and Babe Rue. Visitation will be held on Wednesday, November 7, 2018 at Norberg Memorial Home, Princeton, IL from 10 a.m. to 12 p.m. Services will follow the visitation on Wednesday, November 7, 2018 at 12:00 p.m. at Norberg Memorial Home. The family is asking guest to share words of remembrance about Don at the service. In lieu of flowers, memorials may be directed to the family. Online condolences may be left at www.norbergfh.com Arrangements by Norberg Memorial Home, Princeton, IL

Tiskilwa &#8211; Donald Eugene Sterling Houston, 85, passed away at Perry Memorial Hospital on Thursday, November 1, 2018 surrounded by loved ones. Donald, lovingly referred to as Grumpy, was born on December 4, 1932 to Donald and Celia... View Obituary & Service Information

The family of Donald Eugene Houston created this Life Tributes page to make it easy to share your memories.

Send flowers to the Houston family.