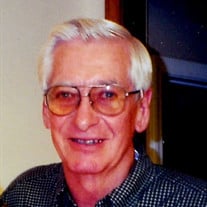 Princeton – Donald Robert Larson, 86, of Princeton, IL, passed away on Sunday, October 13, 2019. Don was born on March 2, 1933 at Perry Memorial Hospital to the late Henry and Lillian (Harrison) Larson. He graduated from Princeton High School in 1951. He received his bachelor’s degree in Geology from Beloit College in 1955, where he was on the cross country and track teams. He was in the U.S. Army where he served as a Military Intelligence Specialist in Okinawa. He met the love of his life, Gail Brugger, and married on February 28, 1959 at the Second Congregational Church in Rockford, IL. He farmed most of his life and also worked in sales for Cargill Nutrena Feeds and retired from V&C Construction. Don worked hard, but also enjoyed fun times with his family. He loved to travel and took his family on many vacations including camping across the country. He and Gail also had fun on numerous cruises. He was a member of the Moose Lodge of Princeton. He was passionate about bowling and was a member of many bowling leagues for close to 50 years. Don was inducted into the Princeton Bowling Association Hall of Fame in 2005. He had a great love of all dogs and cats and in his later years was an avid bird watcher. He was loyal to the Cubs and Bears, and no matter the outcome, he remained a lifelong fan. His favorite thing to do was spending time with his wife of nearly 61 years and his children. Don is survived by his wife, Gail of Princeton, IL; two daughters, Belinda (Larry) La Magdeleine of Polo, IL and Dawn (John Grabs) Larson of Downers Grove, IL; one grandson, Connor Grabs; one sister, Joanne Seaberg; one brother, John Larson; and several nieces and nephews. He is preceded in death by his parents, one sister-in-law, Sandy Larson and one nephew, Tom Larson. A visitation will be held on Friday, October 18, 2019 at Norberg Memorial Home, Inc. & Monuments in Princeton, IL. from 10:00 a.m. to 12:00 p.m. Services for Don will be held at Norberg’s at 12:00 p.m., officiated by Pastor Laura Root-Tanner. A graveside service will follow at Oakland Cemetery in Princeton, IL., Military honors will be accorded. In lieu of flowers, memorials may be directed to Friends of Strays or the Alzheimer’s Association. Arrangements by Norberg Memorial Home, Inc. & Monuments. Online condolences may be left at www.norbergfh.com

The family of Donald R Larson created this Life Tributes page to make it easy to share your memories.

Send flowers to the Larson family.