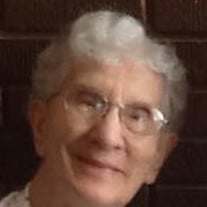 PRINCETON — Dora E. Lee Gibbs, 94, of Princeton passed away Wednesday, Sept. 13, 2017, at Heritage Health in Walnut. Dora was born Dec. 6, 1922, in a farmhouse on Pillar Point, N.Y., to Milton Russell and Ethel M. (Douglas) Lee. She married Roy M. Gibbs in Dexter, N.Y. , on June 30, 1943. He preceded her in death on March 14, 1997. She graduated from Houghton College in Houghton, N.Y., and attended New York University at Buffalo, N.Y. Dora was a teacher, daycare director, pastor’s wife and also did social work. She was a Gold Coat volunteer at Perry Memorial Hospital and was a member of the Princeton Bible Church. Dora lived in 11 states and her greatest achievement was raising her five children to love Jesus. She is survived by her five children, Jean (David) Bobbey, Rebecca (Grant) Bretzlaff; Faith (Rich) Stevens, Joy (Craige) Johnson and David (Betty) Gibbs; one brother, M. Russell (Marion) Lee; one sister, Ida Jean Schroy; 17 grandchildren; and 30 great-grandchildren. Dora was preceded in death by her parents, three brothers, one sister, her husband and one grandson. Funeral services will be at 2:30 p.m. Saturday, Sept. 23, at the Princeton Bible Church with Pastor Curtis Odell officiating. The family will receive friends one hour prior to the services. Burial will take place after the services in Oakland Cemetery in Princeton. Cremation has been accorded. Memorials may be directed to the Princeton Christian Academy and/or the Bureau County Senior Center. Online condolences and tributes may be left at www.norbergfh.com.

The family of Dora Gibbs created this Life Tributes page to make it easy to share your memories.

Send flowers to the Gibbs family.