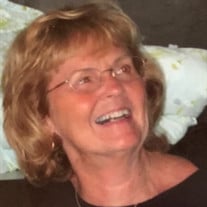 Princeton - Doris Diane Ayer Seidel, 86, of Princeton Illinois passed away on Friday, November 27, 2020 at Manor Court in Princeton, IL. She was known as Diane, her middle name, as her mother was also named Doris. She was born in Keokuk, Iowa to the late “Mickey” and Doris (Arnold) Ayer. Diane attended Lindenwood University for two years and then transferred to Knox College where she graduated with a degree in Foreign Languages and Education. It was at Knox College where she met her husband, Tom Seidel, who at that time was dating her roommate. They fell in love and were married August 4, 1956 at the First Presbyterian Church in Keokuk, Iowa. She spent most of her life as a teacher – initially High School French, then 3rd and 1st grade at Lincoln Elementary School in Princeton. She always had many fond memories of all her students. Diane also played an essential part of the support of their family farm. Diane enjoyed playing the piano and the organ and also played the organ for church services for a short period of time. She loved spending her summers at her home on Green Lake, Wisconsin where she had frequent visitors from family and friends. She loved taking long walks around the lake, entertaining her family and friends, and taking long casual boat rides or just being on the boat as a spotter so she could watch her kids and grandkids water ski. Her grandchildren, who loving referred to her as Gramma Di, we’re her world and she did her best keeping up with all of their events, sports, and extracurricular activities. She and her family even decided to name her last boat she purchased the “Gramma Di.” Diane was also very active in PEO and her PEO sisters played an important part in her life. She is survived by her two children, Mark (Kathy) Seidel of Princeton, Il. and Sarah (Garry) Pinter of Vernon Hills, IL; six grandchildren Matthew (Kristin) Seidel of Morris, IL, Dustin Seidel (Jacqueline Miller) of Princeton, IL, Daniel Pinter of Denver, CO, Haley Pinter and Nicole Pinter of Vernon Hills, IL, Sean Pinter of Chicago, IL; four great grandchildren Paxton, Abel, Waylon, and Porter Seidel; and one brother, Fred (Teri) Ayer of Tucson, AZ. Diane was preceded in death by her parents, Mickey and Doris Ayer, and her husband of 58 years, Thomas Seidel (9–12–2014). The family will be holding a memorial service at a later date and time. In lieu of flowers, memorials may be directed in Diane‘s name to the Princeton Public Library. Online condolences and memorials may be directed to www.norberg.com Arrangements by Norberg memorial home, Inc. and monuments

Princeton - Doris Diane Ayer Seidel, 86, of Princeton Illinois passed away on Friday, November 27, 2020 at Manor Court in Princeton, IL. She was known as Diane, her middle name, as her mother was also named Doris. She was born in Keokuk, Iowa... View Obituary & Service Information

The family of Diane created this Life Tributes page to make it easy to share your memories.

Send flowers to the Seidel family.