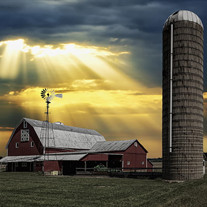 Princeton – Dorothy D. Pinter, 96, of Princeton, passed away at Liberty Village/Manor Court in Peru, IL on Tuesday, October 27, 2020. Dorothy was born in Sylvis, IL to the late Fredrick and Lorraine (Balmer) Stahr on August 15, 1924. She graduated from United Township High School, Class of 1938. She married the late Warren Pinter on December 31, 1944 at the St. John Evangelical Lutheran "Church on the Hill”. They were married for 65 years before his passing in November of 2010. She worked for The State Bank of Cherry Illinois as a bookkeeper for 30 years before retiring. She also spent early mornings and long nights as a farmer’s wife. She was an active member at Church on the Hill and loved spending time with her grandchildren, friends, neighbors and family, just hanging out. She was hardworking, kind and loving and will be missed by all that knew her. Dorothy is survived by one son, Rod Pinter of Malden, IL, one daughter, Lori Ann (Connie Bergagna) Liebe of Albuquerque, NM; three grandchildren, Cori Lynn Meredith, Rachel Marie Theodore and Technical Sargent Christian Liebe; eleven great grandchildren and one great great grandchild. She is preceded in death by her parents, Fredrick and Lorraine Stahr, her husband, Warren J. Pinter (11/4/2010), six siblings as well as several in-laws. In lieu of flowers, memorials may be directed to St. John Evangelical Lutheran “Church on the Hill” cemetery care fund, 12927 Co Rd 26, Princeton, IL 61356. A private graveside service will be held, officiated by Pastor Michael Slutz. Online condolences and memorials may be directed to www.norbergfh.com Arrangements by Norberg Memorials Home, Inc. & Monuments.

The family of Dorothy D. Pinter created this Life Tributes page to make it easy to share your memories.

Send flowers to the Pinter family.