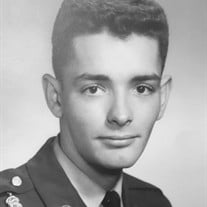 Princeton – Douglas E. Albright, 72, of Princeton, IL passed away on Saturday, December 8, 2018. Doug was born in Princeton, IL to Everett and Lucille (Maupin) Albright on July 19, 1946. He attended Princeton schools and met the love of his life, the late Dixie Lee Fritz, in the 8th grade. He and Dixie married on March 17, 1968 at The First Christian Church of Princeton, IL after Doug returned from Vietnam. Doug served in the Army stationed in Vietnam from 1965-1968 as a communication specialist. Doug attended The World Wide College of Auctioneering in Mason City, Iowa where he graduated as an auctioneer. He also earned his Local 150 Operators of Engineering certificate in 1975. Doug took great pride in his work and often was heard calling auctions for fun and enjoyed driving his family around to his job sites. He enjoyed camping and horseback riding, fishing and mowing the grass. Family and friends could often see him on his tractor in the front yard, wearing his cowboy boots, where they would stop for a cool drink or just to chat for a few moments. He loved to attend car and truck shows, always a Ford man with appreciation for sharp and fast cars. He loved coaching his daughter’s softball teams and more recently attending his grandchildren’s extracurricular activities throughout the school year and summer. He enjoyed a nice drive around town. He would greet you with a smile and liked to talk about the past and he was a great storyteller and joke teller, always getting into character to make the story or joke even more special. Doug is often described as a devoted husband and father and loved his family more than anything. Doug is survived by two daughters, both of Princeton, Bridget (Eric) Gualandi and their children Marissa, Mason, Giovanni, Bianca and Vinni; Catina (Derick) Klingenberg and their children Kamilla and Zeke; two great grandchildren, Apollo and Esmeralda; two sisters, Dorla Barton and Nina Melbrech; as well as several other loved ones. He is preceded in death by his parents, his loving wife Dixie Fritz Albright (2007), two brothers, George Albright and Keith Albright and one sister Phyllis O’Dell and two siblings in infancy. A visitation will be held at Norberg Memorial Home, Inc. on Thursday, December 13, 2018 from 4:00 p.m. to 6:30 p.m. Military Honors for Doug will be presented at 5:00 p.m. at Norberg Memorial Home, Inc. by the Princeton American Legion #125. Services for Doug will be on Thursday, December 13, 2018 at 6:30 p.m. at Norberg Memorial Home, Inc. Princeton, IL. In lieu of flowers memorials may be directed to American Legion #125 in Princeton, IL. On line condolences may be left at www.norbergfh.com

The family of Douglas Edward Albright created this Life Tributes page to make it easy to share your memories.

Send flowers to the Albright family.