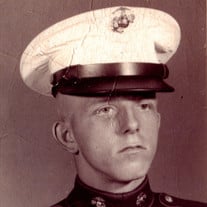 Princeton – Douglas A. Storm, 67, passed away on Thursday, June 27, 2019 at his home, surrounded by loved ones. He is no longer here, he is someplace else with the angels, and getting better looking every day. Doug was born on July 15, 1951 to Arthur & Bessie (Hawkins) Storm. He was a Princeton High School graduate and attended Illinois Valley Community College. He enlisted in the U.S. Marine Corps, serving our country proudly from 1969 to 1973. He married his adored sweetheart, Joelle Harris, on July 27, 1973 in Princeton, IL. He worked at Motor Wheel in Mendota as a Quality Assurance Manager for over 20 years until it’s closing. He then moved on to Gord Industrial Plastics as the General Manager. He enjoyed fishing, hunting, reading, and especially spending time with his family. Doug is survived by his loving wife of forty-five years and eleven months, Joelle, four children, Chance Storm of Lacon, IL., Michelle Storm Leverich (Jason) of Nashville, TN., Melissa (Benito) Gonzalez of Spring Valley, IL., Linda (Michael) Battaglia of LaSalle, IL; thirteen grandchildren, Alisa, Ben, Brandon, Austin, Christopher, Brittany, Rhonda, Jasmine, Brianna, Jared, MacKayla, Gwen, and Kaleb, and five Great- Grandchildren. He is survived by six sisters, Judy Charolette (Peter) Sorkalla, of Germany, Frances Peterson, of Princeton, IL, Carolyn (Russell) Stinar, of Malden, IL, Janice (Robert) Browning, of Wichita, KS., Nancy (Donald) Bell, of Sheffield, IL., and Mary Etta (JD) Dickenson of St. Francis, MN., four brothers: Charles Storm, of Streator, IL, Eugene Storm of Princeton, IL. Robert Storm (Cindy) of Princeton, IL., and Wesley Storm (Sandy) of Princeton, IL., and his lifelong friend, Glen Anderson. Doug was blessed to have been a friend and mentor to many over his lifetime. He had a large extended family but being an Uncle and Great Uncle to his nieces and nephews brought him great joy. Doug shared a connection to many pets over the years, but in his passing, he found great comfort with his dog PeeWee Bowser by his side. He is preceded in death by his loving and amazing mother, Bessie Jean (Hawkins) Storm, his Father, and his beloved sister, Bonnie Cornelio. As well as many family members that became Angels way to soon. Visitation for Doug will be held at Norberg Memorial Home, Inc. on Saturday, June 29, 2019 from 10:30 a.m. to 11:30 a.m. Funeral Services will be immediately following the visitation at 11:30 a.m. Graveside Services will be at Corss Cemetery, Princeton, IL., with full military rights and honors. In lieu of flowers, memorials may be directed to the family. Arrangements by Norberg Memorial Home, Inc., Princeton, IL. Online condolences may be left at www.norbergfh.com As Doug would surely want us to remind you; the pleasure was all yours.

Princeton &#8211; Douglas A. Storm, 67, passed away on Thursday, June 27, 2019 at his home, surrounded by loved ones. He is no longer here, he is someplace else with the angels, and getting better looking every day. Doug was born on July... View Obituary & Service Information

The family of Douglas A. Storm created this Life Tributes page to make it easy to share your memories.

Send flowers to the Storm family.