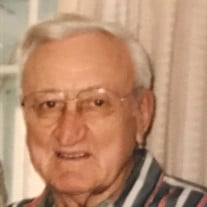 Princeton, IL - Edgar Christian Sinn, 98, of Princeton, IL entered life in the spirit on July 25, 2018. He was born on the family farm on March 1, 1920, in Mackinaw IL the son of Karl Michael Sinn and Sophia Ehmann Sinn. He married the late Esther Moore in Peoria IL Feb. 21, 1948, at Second Presbyterian Church. Edgar helped his family farm with horses until 1936. From 1942 to 1945 he served as a Sergeant in the Eighth Army Air Force in North Africa, Italy, and France. He was the last survivor of a company of 89 men. He was awarded the Silver & Bronze Battle Stars for bravery in campaigns and battles fought in Tunisia, Sicily, Naples, Foggia, Rome, the Arno River, the Northern Apennines, & the Po Valley. Edgar was CEO of Sinn Oil Company in East Peoria from 1957 to 1979 when he retired to farm once more in Princeton. He was a Master Mason for 50 years and Secretary of the Princeton Masonic Lodge 587. He was a member of Elks Lodge #1461, Princeton, and AMVETS. He volunteered with "Meals on Wheels" in Princeton and was very involved with physical improvements at Hampshire Colony Congregational Church over the years. He had previously been an active member of Bethel Memorial Church of Creve Coeur, and Morton Community Church. He was more recently a member of the Evangelical Covenant Church of Princeton, IL. Ed and Esther traveled the world and spent many weekends ball room dancing all over Central Illinois and playing cards with friends. Having dodged death so many times and in so many ways he became a firm believer in Psalm 91 vs 10-12. His family wishes to sincerely thank his extraordinarily kind neighbors and friends in Princeton who helped him to live independently in his own home until July 2018. He was loved by all, honored for his humility and integrity by many, and will be sorely missed in this world but not the next where his Homecoming will be especially sweet. Edgar is survived by his daughter, Jennifer Sinn Choate of Cincinnati, OH, his son David R. (Connie Wunder) Sinn of Spring Bay, grandchildren, Natalie Sinn Cornejo (Victor) of Las Vegas, NV, Kathryn Choate Hudson (Jeremy) of Cincinnati, Rachel Sinn Krass (John) of Chicago, Julia Sinn Voss (Kurt) of St. Louis, Andrew R. Choate (Katie Kerkhoff Choate ) of Park City, UT, David J. Edgar Sinn of Spring Bay, 13 great grandchildren, and 24 nieces and nephews. He was preceded in death by his daughter, Mary Beth Sinn in 1952, his son Thomas Alan in 1955, his daughter, Cynthia in 1957, his wife, Esther in 2009, five half brothers and sisters, seven brothers and sisters, 16 nieces and nephews, and his son-in-law Daniel R. Choate. Visitation will take place at 9:00 a.m. on Saturday, July 28, 2018 at the Evangelical Covenant Church, Princeton, IL. funeral services will commence at 11:00 a.m. at the Evangelical Covenant Church, Princeton, IL, officiated by Chaplin Col. Bernard Windmiller and Dr. John Weborg, followed by a luncheon at noon at the church. Graveside burial service at Mackinaw Township Cemetery in Mackinaw, Ill. at 3:00 p.m. In lieu of flowers, memorials may be directed to the Evangelical Covenant Church, Princeton, IL. Arrangements by Norberg Memorial Home, Princeton, IL Online condolences may be left at www.norbergfh.com

Princeton, IL - Edgar Christian Sinn, 98, of Princeton, IL entered life in the spirit on July 25, 2018. He was born on the family farm on March 1, 1920, in Mackinaw IL the son of Karl Michael Sinn and Sophia Ehmann Sinn. He married the late... View Obituary & Service Information

The family of Edgar Christian Sinn created this Life Tributes page to make it easy to share your memories.

Send flowers to the Sinn family.