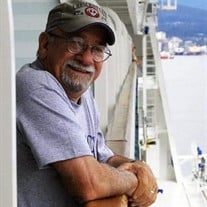 Princeton – Edward Robert Van Dyke, Jr. 83, passed away at the University Of Iowa Hospital in Iowa City, IA on Monday, August 31, 2020 surrounded by his loved ones. Ed was born on January 5, 1937 in Chicago, IL to the late Edward and Helen (McKendrick) Van Dyke Sr. he was a graduate of Calumet High School, Class of 1955. He married Barbara Funderberg in Crescent City, FL on November 19, 1997. He worked for Illinois Bell for 40 years as a linemen engineer. He also worked a few side jobs delivering bread and washing trucks. He loved fishing, golfing and yard work. He was very outdoorsy and enjoyed being outside as much as possible. He enjoyed road trip and traveling around seeing different areas. He was a Chicago Bears and Chicago White Sox fan. He and Barb would spend six months a year in Georgetown Florida so he never had to stop doing the things he loved the most. Ed would take out the pontoon on the Mississippi river with family and friends and according to his grandchildren, he was the best hugger who will be so missed. He also will be missed by his loyal four legged companions, Lucky and Suzy-Q. Ed is survived by his wife, Barbara Funderberg Van Dyke of 22 years; three children John Van Dyke of Sycamore, IL, Christine (Edmund) Raciunas of Lemont, IL and Steve Van Dyke of Marseilles,IL; six step children, Veronica (Gene) Chadd of Geneso, IL, Katherine (Cal) Hermes of Rock Falls, IL, Jerry Echebarria, Jr. of Rock Falls, IL, Barb “Tunie” Echebarria of Savanna, IL, Mike (Becky) Echebarria of Sterling, IL and Rich (Janice) Echebarria of Rock Falls, IL; Six grandchildren including Dan (Melissa) Van Dyke, Brittany Van Dyke, Sarah Van Dyke, Jeanette Van Dyke, Emily Van Dyke and Jessica Van Dyke; 14 step grandchildren; and 17 great grandchildren. He is preceded in death by his parents, Edward and Helen Van Dyke Sr., two sons, Eddie Van Dyke and Billy Van Dyke, two grandchildren, Ryan Echebarria and Isabella Echebarria, one great grandchild, Alisea Plemmons. In Lieu of flowers, memorials may be directed to the family. A graveside service will be held on Saturday, September 5, 2020 at the Mason Cemetery, Princeton, IL at 11:00 a.m. officiated by Reverend Lex Funderberg, followed by graveside services. Arrangements by Norberg Memorial Home, Inc. & Monuments Online condolences and memorials may be left at www.norbergfh.com

Princeton &#8211; Edward Robert Van Dyke, Jr. 83, passed away at the University Of Iowa Hospital in Iowa City, IA on Monday, August 31, 2020 surrounded by his loved ones. Ed was born on January 5, 1937 in Chicago, IL to the late Edward and... View Obituary & Service Information

The family of Edward R Van Dyke created this Life Tributes page to make it easy to share your memories.